During the 1950s, the first live televised broadcasts contributed to both the success of international football events and increased sales of television sets. Behind this seemingly simple win-win relation, which made this sport into a European mass media spectacle, lasting tensions emerged between the three major actors involved: football authorities that were members of UEFA, television companies affiliated with the EBU, and the public. The history of televised European football was also written in relation to these tensions. 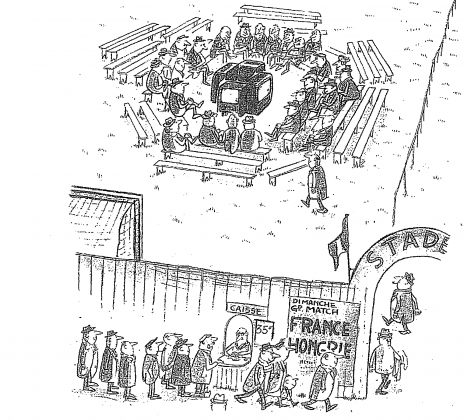 After the Second World War, the early years of public television in Europe more or less coincided with the return of major international sporting events. Even more so than the Olympic Games or major bicycle or automobile races, it was live broadcasts of the football World Cup starting in 1954, and the European Champions League Cup starting in 1956, that provided budding Eurovision with its most remarkable cooperative events in terms of both audience and the human, technical, and financial means involved. Since the 1950s, television has continually accompanied—including across borders—the popular success of international football competitions, both live and in the form of summaries of recorded matches. Football fueled the rise of television between 1948 and 1965, with the number of television sets rising from less than 90,000 units located exclusively in Great Britain, to over 58,000,000 for all countries connected by the Eurovision network. The American precedent left little doubt regarding the robust prospects for this trend. Television reciprocally fueled the rise of football as a mass spectacle.

The implementation and extension of Eurovision in 1954 was often closely linked to a major sporting event. The World Cups held in Switzerland in 1954 and Sweden in 1958 were connected to the membership of these countries in Eurovision, and were broadcast with the crucial support of the BBC. It was also on the occasion of a sport deal that Franco’s Spain joined Eurovision in March 1960. The day after a suspenseful away match for the European Cup between OGC Nice and Real Madrid, the French channel RTF and the Spanish channel TVE decided to create a temporary channel in less than three weeks with four relays to transmit the images from the home game to be played in Madrid across the Pyrenees via Barcelona and Toulouse, and from there onward to seven other countries in Northern Europe. A few months later, the Union of European Football Associations (UEFA), which organized the competition, and the European Broadcasting Union (EBU), which was behind the Eurovision network, agreed to provide systematic coverage of European Champions League matches.

For all that, the space granted to football on television varied from one country to another, with the primary factor being football’s rank among other sports on the national level: “national” sport, leading sport, or secondary sport? The technical means available, as well as the composition and retention of technical teams, was another factor affecting the quantity and quality of images proposed to the public. Marconi Orthicon type cameras—essential to producing live quality reports outdoors beginning in in 1952, and equipped with zooms in 1955—along with the first American Ampex video recorders, made all the difference. Video recorders enabled pre-recorded broadcasts in most major football countries, along with new services that would change the viewing experience, such as replay, and slow motion beginning in 1966.

In most countries, the relation between football and television was more complicated than appears at first glance. The appearance of the new medium fueled recurring conflict between football authorities and public television companies. Broadcast matches enjoyed large audiences, but should everything, and could everything, be broadcast? During its first general assembly held in Vienna in March 1955, the UEFA asserted--solemnly and against the clear desires of the masses--that national federations had absolute discretionary power over televised broadcasts of football matches, with de facto control over whether to authorize a televised broadcast of a particular match. The basis of this remarkable decision was never truly challenged by European governments, which were ordinarily obsessed with control over media within the context of the Cold War and decolonization. In general, the refusal to provide live coverage on the part of federations or professional football leagues was officially to protect the ticket sales of amateur clubs. This invariably sparked stormy debates and violent polemics, especially when the national team—supposed to represent the entire nation—could not be viewed by a large audience. The Italy-FRG match played on December 18, 1955 is an early example. Opposing the two European nations that had been world champions, the broadcast of this “match of the year” on Eurovision was highly anticipated in Italy, the FRG, and many other European countries where the winter break in elite championships had already begun. The stubborn refusal of the German federation to any live broadcast from Rome, in order “to protect the rare amateurs still playing one week before Christmas,” earned it thousands of insulting letters. On top of everything, at midnight on the day before the match, the joint union for technicians for Italian television (RAI), were prepared to “take European football hostage” to obtain their wage claims. The strike lasted until halftime of the match, preventing live televised broadcast or radio coverage of the first half to Italy and the rest of Europe.

The contradictory logic of competition and promotion underpinning the relations between football and television often deprived the general public of the live broadcasts of top-level international matches that they enjoyed so much. The promise of public television for all, an integral part of a reformed welfare state in the aftermath of the Second World War, was subsequently unfulfilled. Reports by journalists and letters to the editor published in the European press at the time bear witness to this disappointment and its political impact. Direct blame was place on continuity in management, especially at sport organizations, and more broadly on the persistence of a conservative social order.

At the turn of the 1960s, stadiums were equipped with new lighting systems, making night programming gradually possible. This allowed European Cup matches to reach a wide audience during the week, and qualifying matches not to compete with amateur games on Sunday afternoon. The popular success of televised football grew as a result. Federations and leagues would henceforth argue that more live televised broadcasts of football matches opposing the European elite would hurt ticket sales for national championships, and therefore continued to call for strict limits on them. This theory became established across the entire profession, and was challenged only with the emergence of private channels and the sharp rise of broadcast rights during the late 1980s.