Europe and the legal regulation of international relations

Spain and Portugal Divide the World Between Themselves

On June 7, 1494, Spain and Portugal agreed to fix the boundary between their respective domains along a meridian 370 leagues west of the Cape Verde islands. They established two areas in which they would have a monopoly over discovery, navigation, and trade. Quite rapidly however, Iberian pretentions to exclusive access over certain areas raised a series of difficulties and disputes that were characteristic of the period during which Europeans adapted to a global space that was increasingly better known. 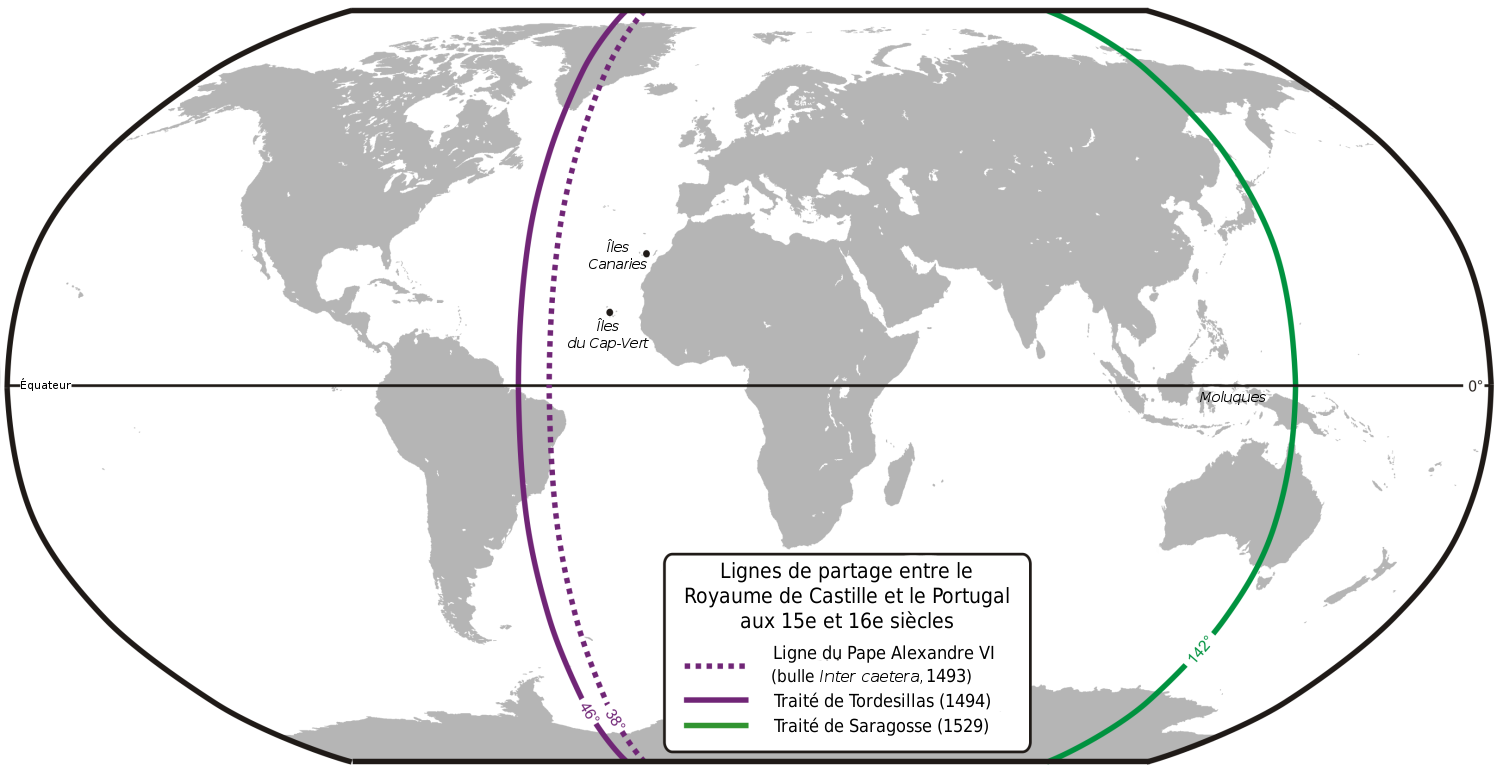 Colonial demarcation lines between Castille/Spain and Portugal in the 15th and 16th Centuries.

During the second half of the fifteenth century, a series of papal bulls granted the Portuguese a monopoly, to the detriment of Saracens or pagans, over lands that had been or were to be conquered. The Portuguese nevertheless had to pay attention to the rival pretentions of the Castilians, who also had ambitions of extending toward the south. The Treaty of Alcaçovas (September 4, 1479) allowed Castile to keep the Canaries, while Portugal received official recognition over the Azores and Cape Verde islands, and especially over the exclusive right of navigation, discovery, and trade beyond Guinea. This treaty, which was confirmed by a papal bull in 1481, established the principle of attributing an area outside of Europe to a single European country. Consequently, the only possible path of direct navigation toward Asia for the Spaniards was the western one taken by Christopher Columbus. In March 1493, before returning to Spain, the navigator touched land at Lisbon, where he was received by King John II of Portugal, who made it clear that he was claiming sovereignty over the lands that had just been discovered, on the basis of earlier papal bulls. Between the right of discovery for the Spaniards and papal engagement for the Portuguese, the Iberian powers were opposed to one another over legitimate ownership of new lands. The importance of this question pushed Pope Alexander VI to issue the Inter caetera bull (May 4, 1493). It granted the Catholic Monarchs, Isabelle of Castile and Ferdinand of Aragon, "full and free power, authority, and jurisdiction" over the lands discovered or to be discovered that were located 100 leagues “towards the west and south” of the Azores and Cape Verde islands. This concession was accompanied by a “rigorous” ban “under penalty of excommunication” for any foreigner who tried to travel to these places without authorization. The line of demarcation was for the most part only an indication, and equalled two days of navigation from Portuguese possessions.

John II of Portugal consequently asked the Catholic Monarchs to directly negotiate the boundary of their Atlantic domains. The discussions culminated in the signing of the Treaty of Tordesillas on June 7, 1494. The purpose of the agreement was to resolve the “controversy over what part belongs to each of the two parties of the space remaining to be discovered.” To this end, it was decided that a line “from pole to pole” would be drawn 370 leagues from the Cape Verde islands. The eastern part would be part of the Portuguese domain, and the western part that of the Spanish. Each would commit to not sending vessels to navigate in the partner's area, although an exemption allowed Spanish ships to cross the Portuguese domain in a “straight line” toward the West. The signatories also committed to not appeal to the pope's authority for support against the commitments of the treaty, but only to request its recognition, which was provided in 1506. It was really a matter of a diplomatic agreement about territorial division that indeed did not raise questions of evangelization.

The primary arrangement of the treaty was the establishing of the limit between the Spanish and Portuguese areas 270 leagues further west of the one fixed by the Inter caetera bull of 1493. The western shift of the demarcation line enabled the Spanish to exert their domination over a larger part of what they thought to be Asia. For the Portuguese, situating the line 370 leagues to the west of the Cape Verde islands allowed them to control the route to India going around the Cape of Good Hope. Moreover, even though there is no formal evidence, a number of indications suggest the possibility that the Portuguese already knew of the existence of land in the South Atlantic in 1493. The new agreement allowed them to guarantee sovereignty over what would become Brazil, which was officially discovered in 1500.

Although the arrangements in the Treaty of Tordesillas resolved Atlantic disagreements, they also fuelled other difficulties. In the early 1510s, the Portuguese set foot on the Moluccas archipelago, which was a clove producing area. The Spanish challenged their right to establish themselves there, considering that the Treaty of Tordesillas had divided the earth into two hemispheres, and that the archipelago was located in their part. The ensuing years saw skirmishes opposing the Portuguese and the Spanish over possession of the Moluccas, due to the impossibility of determining the anti-meridian corresponding to that of Tordesillas. The Moluccas dispute was finally resolved by the Treaty of Saragossa (April 22, 1529), signed by John III of Portugal and Charles V. It provided for the determination of a demarcation line passing 297.5 leagues east of the Moluccas, which were recognized as being Portuguese. In the end, the Portuguese hemisphere was approximately 187 degrees, and the Spanish one 173 degrees, a practically equal division into two demispheres.

The monopoly over discovery, navigation, and trade established in favour of the Iberian powers was challenged by France, England, and later by the Dutch Republic. They believed that the papal decisions were not binding, and that the treaty was a bilateral commitment applicable only to the signatories. Francis I took offence to the Iberian monopoly over unknown lands, and is said to have asked “to see the clause in Adam's will and testament that excludes me from sharing the world.” In the 1520s, he financed expeditions commanded by Giovanni da Verrazzano that also aimed to find a passage to Asia. Over the course of the sixteenth century, the Iberians reminded all of the ban forbidding foreigners from navigating in their respective domains. At the same time, however, the Spanish established themselves in the Philippines, which was in Portuguese territory according to the arrangements of the Treaty of Saragossa. The rivalry between states over discoveries, navigation, and trade in the Americas as well as Asia led to a controversy between partisans for the exclusivity of maritime domains, mare clausum, and those for the freedom of the seas, mare liberum. In 1609, in his Mare liberum (The Freedom of the Seas), the Dutchman Hugo Grotius defended the notion that the law of nature and of nations prohibited any appropriation of the high seas, which were considered to be the common property of all countries. It was only beginning in the 1640s that Spain and Portugal admitted the right of foreigners to navigate in what, for a time, they considered to be their part of the world.