Since Antiquity, the ideal of virility has been built on the model of the Greek citizen-soldier, notably in war. The Revolution conferred rights upon the soldier, and exalted his courage and acceptance of the supreme sacrifice. During the nineteenth century, Romantics, partisans of colonization, and nationalists continued to base virility in war, while in civil societies a less bellicose masculinity imposed itself. In the twentieth century, increases in firepower, the transformation of combat, and recognition of the fear and psychiatric disorders of combatants, weakened the military-virile model. All the same, the values preached in war and espoused by the army remain first and foremost masculine ones. 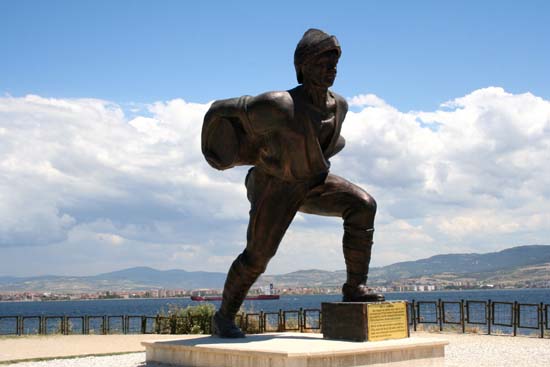 Statue erected in Gallipoli (1922) in honour of Corporal Seyit, hero of the Turkish army

The ideal of virility, a normative standard inspired by the model of the Greek citizen-soldier and intimately linked to the nation, was notably constructed during times of war. While under the Ancien Régime the profession of arms was reserved for an elite, with the mass conscription of 1793 it became a characteristic of all young men in good health, and as such served as one of the primary attributes of virility. The Revolution granted rights to the citizen-soldier: the laws of October 22nd 1790 and May 12th 1793 ended the arbitrary nature of military justice, it became possible for a soldier to climb the ranks regardless of his social background (Ney, the son of a cooper, became a Marshall of the Empire), and the evolution of forms of combat gave soldiers greater initiative in battle. To die at the front was considered the act of an accomplished citizen ready to die for his country, and was glorified accordingly. In Europe, the Revolutionary and Napoleonic wars constituted schools of virility: there was mass recruitment, along with male bonding and the proximity of danger reinforced the feeling of belonging to a community of men. Napoleon's grognards or the Russian Cossacks were established as paragons of virility, while the bravest were distinguished by the Légion d'honneur in France (1802) or by the Prussian Iron Cross (1813).

The cult of military heroes such as Admiral Nelson in the United Kingdom, Prince Koutouzov in Russia, or Theodor Körner, an Austrian volunteer in the Prussian army during the Wars of Liberation (1813-1815), helped spread the ideal of warlike virility within European societies, as well as martial virtues such as force, valour, and loyalty. The Romantics magnified warlike heroism and even enlisted in Greece’s struggle for independence, like Byron, who died there in 1824. Finally, the practice of the duel enabled men to restore their offended honour. During the second half of the nineteenth century, Garibaldi the Italian and Bismarck the German embodied the warlike virility of nations that had won their unity through arms.

Although a less bellicose masculinity preaching moderation and self-control imposed itself in France and England during the nineteenth century, colonial conquests were conceived of as a means of national and virile regeneration. The quest for adventure, hunting practices, and the technological superiority of Europeans to take control of coveted territories contributed to shaping their warlike virility. With the growing influence of theories of martial races, this virility also grew by rejecting alterity, considered as effeminate or savage. This is demonstrated by the French adage “Moroccans fight like lions, Algerians like men, and Tunisians like women,” or in the British Empire's praise for the warlike qualities of the Gurkhas of India or the Highlanders of Scotland. The Russian Empire praised the warlike virility of European Slavic peoples, in contrast to the femininity or bestiality of Asian peoples.

The spread of the Prussian model of compulsory service in France, Italy, and Belgium on the eve of the First World War also contributed to the reinforcement of militarized virility. In August 1914, general mobilization revived glorification of the citizen-soldier model, ready to sacrifice his life through patriotism. In the United Kingdom, in order to encourage volunteering, propaganda called on the courage and determination of young men, whose virility was put to the test by war. At the front, the experience of deprivation, solidarity among men, and the high consumption of alcohol contributed to the reaffirming of the military-virile model. The exaltation of the virility of soldiers raises the question of the fulfillment of their supposed “sexual needs” through recourse to prostitution, which was condemned (United Kingdom), or supervised through the control of brothels (Germany) or the creation of military brothels in the field (France). For all that, the military-virile model was also shaken by the Great War. Firepower mutilated bodies, increased the sense of powerlessness felt by soldiers  confronted with an anonymous death, and disturbed soldiers’ spirits, as illustrated by the recognition of psychiatric disorders linked to war (shell shock). The increased diffusion of the words and images of combatants made their fragility more visible, and thus helped demystify the military-virile stereotype, which nevertheless was not swept away by the conflict's violence: the cult of the hero was followed by the homage to the unknown soldier, while praise for a fine and masculine death still remained.

Victory was accompanied by a pacifist discourse, one that toned down the cult of warlike virility in societies where the weight of grief stifled triumph, while defeat inversely tended to exacerbate it. For instance, the Turkish government erected a monument in 1922 in honour of Corporal Seyit, who distinguished himself by carrying three shells of 275kg, thus using his strength to contribute to the victory in the Dardanelles. The Arditi (nationalist veterans) in Italy and the Freikorps (Free Corps) in Germany used violence to renew the virility of defeated societies. During the interwar period, Soviet society was also imbued with a militarized virility (muzhestvo), founded simultaneously on ancient virtues such as aggressiveness, power, courage and endurance, as well as on the cult of former Slavic heroes such as Ivan the Terrible or Alexandre Nevski, and on a certain self-control imposed by the defence of the country in the name of communist ideals. Italian fascism and German Nazism exalted a racialized masculinity anchored in war in order to reconstruct a national community: like warriors on a crusade in the service of faith, the Fascist and the Nazi were held up as models for all of society. In Spain, Falangists claimed to be the successors of the conquistadors, and sought to restore by way of arms a virility that had diminished through the loss of colonies and the feminization of the country by the Republic.

In reaction to this ultra-militarized masculinity, a “tempered virility” asserted itself in Great Britain during World War Two. Doctors imposed the idea that psychiatric disorders of war constituted a normal reaction to the violence of combat, and thus shook the myth of the infallible warrior. After the humiliating defeat of 1940, attributed by Pétain to the devirilization of French society, the French army, which began rebuilding itself in 1942 thanks to soldiers from its empire, glorified a more rustic virility, and was late in recognizing the neuroses of war.

The extreme violence of World War Two and the wars of decolonization ended Europe's virile enthusiasm for warlike prowess, and put an end to the heroic quest for sacrifice and glory. In Algeria, Malaysia and Angola, soldiers from France, Great Britain, and Portugal experienced a new and disturbing type of combat against an enemy that was often imperceptible, which left them with a feeling of powerlessness. The experience of defeat opened up the earlier wound imposed on European warlike virility. The heightened role played by technology, along with the importance of strategic bombardment and the use of drones, have also contributed to making combat less real and rendered its violence anonymous. Finally, the increased participation of women in these conflicts, along with the professionalization and feminization of European armies has certainly loosened the bond between virility and war, although the values espoused by armies nonetheless remain essentially masculine.