Health and the environment

Challenging the devitalization of the soil, the countryside, and modern food, the organic farming movement laid claim to a biological conception of soil fertility, and built itself around innovative practices for maintaining soil life, both of which were neglected by the policies and knowledge of agricultural modernization. It was connected to movements defending rural life and organizations promoting natural food, and also helped build the environmental movement. 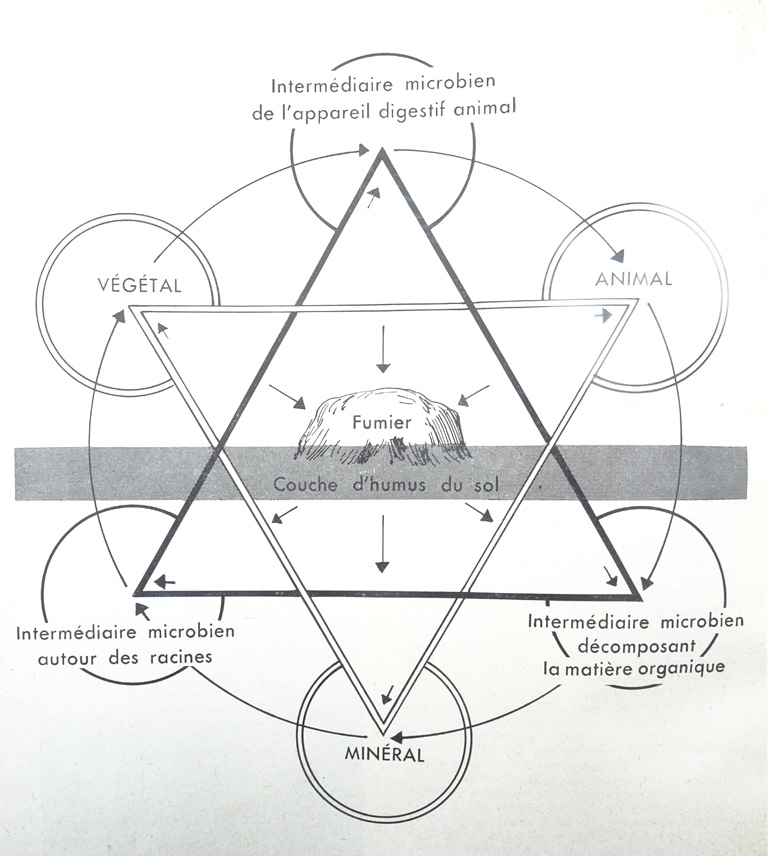 The Origins of Organic Farming: Soil Life Against Chemical Fertilizer

The European history of organic farming, which is marked by great diversity and extensive cross-cutting and hybridization, has its roots in biological conceptions of soil fertility.

In the aftermath of the First World War, which was marked by a serious agricultural crisis in Germany, numerous scientists grew alarmed by the effects of synthetic chemical fertilizer, to which they ascribed a reduction of microbial life, soil acidification, and even declining food quality.  A biological approach to the soil emerged, one that studied its interrelation with plant roots and advocated organic fertilization that nourishes the organisms in the soil. Such concepts were popularized by the life reform movement (Lebensreform), which advocated “natural agriculture.” Theorized by Ewald Könemann in the 1930s, it was based on the practice of green fertilizers and mulching, fertilization with rock powder, limited tillage, composting—including human feces—and the recycling of municipal waste. Given that vegetarianism predominated, it rejected the use of manure, and restricted the use of animal power to the minimum.

Developed by a group of anthroposophic farmers based on the Agriculture Course taught by Rudolf Steiner in Silesia (Poland) in 1924, organic farming was popularized across the European continent by Ehrenfried Pfeiffer. Leaving little room for esotericism, his book entitled Bio-dynamic Farming and Gardening: Soil Fertility, Renewal and Preservation, which was published in 1938 in five languages, developed the biodynamic concept of the farm as a living organism, and conveyed growing alarm regarding global soil erosion. With the circulation of accounts and images of dust storms carrying off the soil in the Dust Bowl, the need to preserve agricultural humus was widely advocated by agricultural science, well beyond promoters of organic farming.

The director of the Institute of Plant Industry in Indore (India), British agronomist Albert Howard developed with his wife Gabrielle a composting method providing higher yields and greater plant resistance to disease, which he believed was connected to dynamic mycorrhizal association (symbiosis between fungus and plant roots). As the organic connection between soil life and human health enjoyed growing importance in the agrarian revival of the 1930s and various branches of hygienic medicine, such as the Pioneer Health Centre created in London in 1935, the diffusion of the Indore Process accompanied the rise of European organic farming movements.

During the Second World War, these organic theories gained a new audience due to fertilizer shortages, acute nutritional issues, and the rise of organicist conceptions of the national body. In Germany, a number of Nazi leaders were interested in biodynamic agriculture, and the movement occasionally collaborated with the Third Reich, before being banned for esotericism in 1941.

During the postwar period, while biological approaches to soil fertility were marginalized in scientific institutions, emerging organic farming movements received crucial support from natural food and health networks. In England, the creation of the Soil Association in 1946 emerged from the encounter between Howardian practices of composting, nutritionist doctors, the urban middle class, and farming practitioners and experimenters such as Lady Eve Balfour, who long remained a central figure. The connection between soil, food, and health was also behind the activity of doctors from the French Association of Research for Normal Food created in 1952, which emphasized microbial dynamics and promoted “living soil” for human health. Health food stores (such as Reformhäuser in Germany beginning in the 1910s), also played an important role in the rise of what was called natural, organic, biological, or ecological farming.

Farmers promoting alternative farming techniques to those used by agriculture modernization (massive use of chemistry, land specialization between agriculture and livestock farming, and the related abandonment of livestock and manure in large-scale cultivation, deep plowing, the return of prairies, etc.) formed associations among themselves, which also helped transform agrarian movements during the postwar era. In Switzerland, under the leadership of Maria and Hans Müller, the defense of Christian peasant farming was organized around a syncretic and original technical system (focusing on surface composting and mulching) used by agricultural cooperatives, whose quality products were promoted by major retailers beginning in the 1960s. While this kind of farming—referred to as organic-biological farming—spread to Austria and Germany, in France the defense of small-scale peasant farming and its independence from the state and agrochemical firms was firstly the doing of the Lemaire company. Focusing on the sale of seaweed, this company implemented an agricultural advisory and supervisory system, thanks to which France quickly became one of the first organic producers in Europe. During these postwar decades, European organic farming was further to the right, even though it had members on all parts of the political spectrum.

Beginning in the mid-1960s, pesticides became a prominent environmental concern, and organic farming emerged as one of the primary crucibles for political ecology. Advocating non-violence and a new alliance with nature, it offered a theoretical and practical matrix for challenging the productivism and scientism of industrial civilization. In 1970, E. F. Schumacher rose to the management of the Soil Association, which would soon count 31 local groups, and preside over the creation of The Ecologist. The engagement of young agricultural engineers also revived debates with national research structures, while the movement’s experimental ambitions emerged with the creation of the FiBL in Switzerland in 1973, which would become the most important research institution for organic agriculture.

The convergence between environmental organizations and farming unions in the 1980s explains the rapid development of organic agriculture in a few countries, such as Spain and Sweden, where it now occupies 20% of the agricultural surface. The structuring of a single organic food market was more decisive in this boom, although contributions were also made by the unification of production standards—with active participation from the International Federation of Organic Agriculture Movements (IFOAM) created in 1972—and the implementation of a certification process, which led to the 1991 regulation (EC Reg. 2092/91). Organic farming has grown from 0.1% of the usable agricultural surface in 1985 to almost 4% in the early twenty-first century, representing a market of 12 billion euros today.