The article presents automobile tinkering cultures and their transformations in different socioeconomic contexts within Europe in the 20th century, focusing on the Greek example especially. Though vehicular tinkering initially resulted from necessity, it often became part of certain social groups’ identity. The article concludes that tinkering blurs the frontier between the production and the consumption of the automobile. 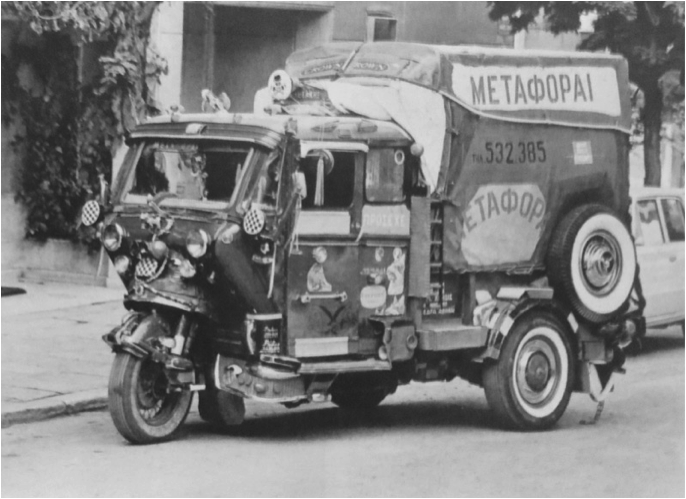 Cultural historians of the automobile usually ask: what did people do with their cars? Well, first they built them! Ιn many cases indeed, people used to build their cars themselves before or alongside driving them. Since the beginning of the 20th century, many automobile users had developed tinkering skills as a response to economic or technical necessity, but also as an expression of a “sentimental attachment” to their cars. For them, tinkering opened an original route towards mobility and autonomy. This article examines the Greek example; because of the idiosyncratic character of this topic there is a scarcity of available evidence for most of the European countries.

Automobile tinkering was first and foremost a necessity related to either poor domestic car production, limited imports of vehicles, fuels and spare parts, or shortage of professional experts and repair facilities. Hence, during the first decades of the 20th century, the automobile owners would typically hire a chauffeur not only as a driver but also as a mechanic. On the other hand, owners willing to drive their cars themselves used them so as to demonstrate both their social status and their technical ingenuity. During the same period, the utility of cars was more flexible since there were farmers who used them for example not only as mobility vehicles but also as stationary power sources.

Though automobility has been popular since the first decades of the 20th century, it was during and especially after the Second World War that automobile ownership massively spread. The more massive the use of automobiles became, the more people turned to tinkering. During the war, countries with a limited military vehicle fleet commandeered civilian cars and transformed them into military vehicles. In such cases, like Greece, citizens started collecting spare parts of abandoned military vehicles and assembled tricycle contraptions, called furkoni. Both the construction and the name of those tricycles had been inspired by similar vehicles used by the Italian army when it invaded Greece. Due to fuel shortage, these improvised vehicles were powered with gas. Mechanics in various countries exerted such techniques. In Finland, automobiles originally designed as gasoline-fuelled were converted to gas-powered. But in the case of self-taught mechanics in Greece for example, the improvised techniques used to power these vehicles were sometimes unorthodox. They even used household water heaters to build a device called gazozen. They fitted it into a combustion engine so as to provide the cylinders with gaseous fuel produced by a system of two metallic tanks, one enclosed within the other. The inner chamber was airtight. Both chambers contained solid fuel (wood). The fuel in the outer chamber was set aflame, so as to heat the inner chamber’s fuel. The latter, unable to combust due to the lack of oxygen, released gases that were led to the normal fuel line of a commercial gasoline-powered vehicle.

But tinkering was not only for economic necessity. During the 1950s and 1960s these practices became part of a technical culture that forged male identity and solidarity. This was the case for example in many Eastern European countries during the Socialist period. Since car production by the state-owned factories was inadequate for consumer demand, there was a black market of spare parts used by people so as to tinker with their old automobiles in their garages. Those garages served as meeting places, where men could tinker with their cars as a hobby, and also escape from the family life of their small apartments. In Greece meanwhile, where domestic car production was poor, the majority of cars were imported from Northern or Western Europe. But when import taxes started rising, most of the consumers preferred second hand cars. Their constant need for repair, along with the common practice of engine and gearbox modification, to increase their horsepower, made garage culture quite popular for Greek drivers until the late 1970s.

In other cases, tinkering, along with the decoration of vehicles served primarily cultural purposes. Such cases survived sometimes until today, and they are mainly connected with the sub-culture of certain social groups. In Greece for example, vehicle decoration was part of truck and taxi drivers’ culture during the 1970s, who used this practice to assert their identity through their vehicle. Another more recent and mainly marginal group in Greece concerns the case of young men called kontrakias who used to modify their cars into race models, and run them in gambling races during the 1980s and 1990s. A similar case concerns a local community in Norway called râners. The members of this community are young men who use garage culture as a reference point of their identity. Since there is no indication of transnational connections among such groups, the coincidence of such phenomena in different countries shows the importance of speed in the Western car culture in general.

From the 1990s onwards, the use of electronics in the automobile industry made aftersales modification inaccessible to non-experts. Car magazines mirrored this change. While they provided technical advice up to the 1970s, they afterwards promoted automobiles as technical “black-boxes” closed for the average consumer. Apart from car enthusiasts or sub-cultural groups who still tinker with old models as a hobby, older cars from the USA and Europe are nowadays sold as second hand products to consumers in Asia and Africa where empirically-trained mechanics still actively tinker and recycle. Additionally, automobile tinkering is still practiced by economically marginalized groups. In Greece, there are non-European immigrants and Roma who collect various machines’ spare parts from junk yards and recycling bins, so as to assemble tricycle contraptions, similar to the furkonis constructed during the Second World War. These vehicles provide them with a means of cheap transportation while scavenging for items or parts and trading their findings, either with other members of their community who use them for their own contraptions or with recycling facilities. With the financial crisis hitting Europe since 2008, unofficial outdoor garages are flourishing in large cities like Paris, raising fiscal but also environmental issues.

In conclusion, tinkering blurs the frontier between the production and the consumption of the automobile. It is a multidimensional phenomenon both in time and space. Where such practices concern sub-cultures, they are connected with the construction of certain groups’ identities within a broader socio-spatial context. Where such practices result from economic necessity, they concern larger groups, as was the case during the Second World War in various countries, or nowadays with the second-hand cars which are sent from Europe and the USA to other continents. Still, the distinction between economic and cultural reasons is not always clear as is obvious in the case of many Eastern European countries, where the deficient indigenous car production led to a garage culture which also served as a reference point for middle class identity re-construction through technology. Finally, the resurgence of such practices by immigrants in Europe shows the spatial and temporal circulation of car culture practices.

Laegran, A.S., “The internet and the Automobile in a Local-Global Intersection,” in N. Oudshoun, T. Pinch, eds., How Users Matter. The Co-construction of Users and Technology, (Cambridge MA, 2003): 81-100.

Papazafeiropoulou, A.S., “Technology Users as Empirically Trained Mechanics. Assembly and Decoration of Improvised Vehicles in Greece during and after WWII,” ICON 18 (2012): 157-178.