In the mid-nineteenth century, the space between the Alps and the Adriatic was home to intense commercial and migratory mobilities, both internal and toward the rest of Europe. The Italian wars of unification led to an unprecedented situation, namely a border between a nation state, Italy, and a multicultural empire, Austria Hungary. The nature of circulations was transformed as a result: everyday trips now involved crossing a border, while certain trade routes were redirected to avoid the border and the customs that came with it. Senses of belonging changed as well, between those who became Italian subjects and those who remained Austrians. A fraction of the border population denounced this dual rupture, which was simultaneously national, as Italian speakers remained in Austria Hungary, and regional, as the border would divide Friuli, a region with its own geographical and cultural unity.

The example of Friuli illustrates the situation of Europeans who changed state without migrating, and henceforth had to cross a border on a daily basis due to recompositions of the continent’s map. 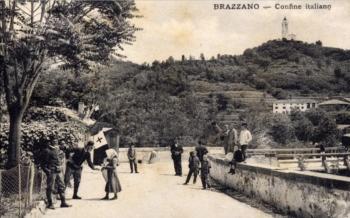 With the war of 1866, the Austrian Empire ceded Veneto to the young nation state of Italy. What used to be an administrative boundary within the empire became an international border. Austria conserved territories peopled by Italian speakers, giving the victory a bitter taste for promoters of Italian unity, especially east of the new border where they believed that the peace treaties shattered the unity of Friuli, a region with its own linguistic, geographical, and historic unity.

Once possessed by the Habsburgs, and henceforth divided between the Italian province of Udine and the Austrian county of Gorizia, this cross-border entity did not correspond to any administrative division. Its mythical borders were established by local scholars based on those of a medieval state: from the Livenza River to Isonzo, and from the Alps to the Adriatic. Notables took the Friulan framework as the basis for their economic and political projects during the first half of the nineteenth century.

The appearance of a border between states changed the nature of trips that were once made within a single empire, and were henceforth perceived as an everyday norm.

Without having left their villages, locals now had to cross a border during their customary trips. Admittedly, they had already been divided between Venice and the Habsburgs from the fifteenth century to the Congress of Vienna; even so, 1866 did not see a return to an earlier situation, for the earlier border was porous whereas the new one separated two sovereign states with a new desire and techniques for surveillance. Customs posts were established along the border, adorned with dynastic coats of arms and flags, while places and times of passage were regulated by a large staff monitoring the crossing of merchandise and people.

This context promoted differentiated national identifications at the border. The insults of “Italian” and “Austrian” were heard during quarrels between villages, and national categories were used to designate adversaries during disputes over land or livestock. Nevertheless, such behavior was often in keeping with endogenous dynamics that predated the times of the Kingdom of Lombardy-Venetia. What’s more, a national lexicon was not necessarily the symptom of national identification, as nationality could be mobilized first and foremost to engage the state in local disputes, and then quickly forgotten when it came to buying cheaper sugar across the border.

Smuggling flourished in Friuli. The highest indirect taxes in Italy on salt, tobacco, and sugar prompted villagers who had become Italian to cross the border to purchase them in the county of Gorizia. Smuggling was either occasional or committed by well-organized groups of smugglers crossing the border at night. Smuggling was decried by the elite of Italian Friuli, who saw it as a national betrayal. The kingdom’s authorities went so far as installing fences to limit secret crossings. There were many smugglers on the eve of the First World War, another sign that national indifference and opportunism reigned among locals.

Migrations and the border

Even before the nineteenth century, the space between the Alps and the Adriatic was the source of intense emigration toward the rest of Europe, one that henceforth had to contend with a border.

Internal migration became international, for instance with departures for Trieste, the Habsburg Empire’s primary access point onto the Adriatic. The peasants of Friuli found work there, as did those of Carniola or Istria, accompanying the port’s astounding expansion in the nineteenth century. However, after 1866 moving to Trieste represented a trip abroad for inhabitants of the province of Udine, with more complex formalities for crossings and stays. Trieste nevertheless remained an attractive center, with 50,000 Italian subjects residing there in 1914 (the regnicoli).

Some migratory flows circumvented or crossed the border in accordance with the changing legislation of bordering states, especially those toward the Americas from the late 1870s onward. In Austria Hungary, the candidates for crossing the border met with numerous bureaucratic obstacles designed to discourage emigration without formally banning it. The border was thus a preferred route for inhabitants of the county of Gorizia and the empire’s south, who crossed it to board ships in Italian ports. Many of them were recruited by agents from Italian shipping companies who entered Austro-Hungarian territory illegally. The Cormons border station became a busy crossing, with an average of 3,000 migrants per year between 1896 and 1903, when Austro-Hungarian legislation authorized departures from Trieste and Rijeka, leading to the emergence of Austro-Hungarian emigration agencies. Crowds dried up at the station in Cormons and the migratory route split in two, with each boarding on their side of the border.

Finally, the border generated a new kind of migration—short commutes—relating to border work. The county of Gorizia was more prosperous than the province of Udine thanks to its modest industrialization, and to the rise in the early twentieth century of market gardening destined for the rest of the empire. The spinning mills near the border attracted labor often recruited in Italian territory, sometimes creating conflict with Austro-Hungarian subjects: in 1892, the laborers in a Brazzano spinning mill went on strike and heaped abuse on “Italians,” who were accused of receiving better pay by an irredentist owner.

A part of the Italian-speaking border elite—property owners, scholars, and merchants—embraced an Italian national identity that subsumed the Friulan one, and suspected Austro-Hungarian authorities of wanting to “Germanize” or “Slavify” the county’s Friulans. To counter this threat, they implemented a genuine educational effort for both Italian elites and locals, with the goal of showing that Friuli was not a “hybrid” land but a cross-border region with its own identity, all while avoiding the specter of a “Fruilan nation” and falling into disgrace in Rome. Associations coordinated the struggle: the Società Alpina Friulana (1874) studied and explored the territory, and the Società Storica Friulana (1911) institutionalized the study of Friulan history.

They branched out across the border, and were connected with the Lega Nazionale (1891), which promoted Italianity in the county of Gorizia. However, imposing an identification was more difficult in Austria Hungary, as there was competition with other national societies such as the German Schulverein and the Slovenian Družba Ciril-Metod. Inhabitants in the countryside did not genuinely sympathize with the actions of the Lega Nazionale, and some joined the Friulan Catholic Party (1906), which promoted a Friulan identity combining peasantry, Catholicism, and loyalty to the emperor.

It was among those who promoted it that Italian national identity took the firmest hold, including changes to ways of life. Gorizia’s bourgeoisie and Trieste’s middle class abandoned the backcountry populated by Slovenophones, which had been their destination for Sunday outings before 1866, in favor of Italian localities. Their counterparts in Udine crossed the border to visit the Roman and medieval ruins of Aquileia, invading irredentist lands for the duration of an outing rather than doing it via a war.