From Pro-European to European education 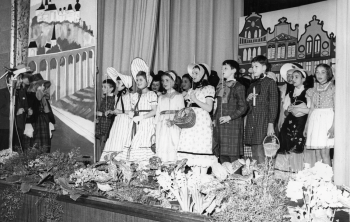 The European Community’s (henceforth Community) involvement in educational policy and particularly the invention and development of the first European School wasn’t planned. In fact, it had no formal or legal competencies in the field of educational policy. As such, the building of the first European School must be seen as a combination of circumstance and pragmatic opportunism. In 1952 the Community was confronted with the problem of the provision of education for the Community officials’ children in Luxembourg, the seat of most of the new Community institutions. Whereas the French, Belgium and German children could have been rather easily integrated into the Luxembourg school system because of the linguistic match, the schooling of Italian and Dutch children in particular proved difficult. And so the Community decided to undertake a unique educational experiment: to create a European School in which all Community children would be taught in four linguistic sections under one roof in a European spirit and with ample opportunity for them to meet, play and learn together. Albert van Houtte, registrar of the European Court of Justice (1953-1982), played a vital role in the negotiations and the set-up of the first European School.

The development of the European School cycle

The European School initially opened as a nursery school at Easter 1953 for children aged 3–6/7. A primary school was opened in October 1953 and following a Community parents’ initiative a secondary school opened in October 1954 with the seven years of the secondary school cycle coming into existence by September 1958. The creation of a secondary school created the need for a specific European leaving certificate:  the European Baccalaureat. It would enable students to attend a University in any of the member states. The Règlement du Baccalauréat Européen was signed in Luxembourg on 15 July 1957. The first European Baccalaureat took place in 1959 with 23 out of 24 candidates obtaining the qualification.

Institutional set-up and daily management of the European School

Until 1957 the European School was run by the Parents Association. With the creation of the European Baccalaureat it became necessary that the diploma (and ultimately the European School) was recognised by all member states. This was made possible by a change of the legal status of the School. On 12 April 1957 the Convention defining the Statute of the European Schools was signed and the School was given the legal status of an intergovernmental school. As such, it was no longer run by the Parents’ Association but collaboratively by the six Member States on the basis of a specific contract between them. On a daily basis the European School was managed by four bodies: first, the Conseil Supérieur; second, two Conseils d’Inspection (Board of Inspectors); third, the Conseil d’Administration (Administrative Board) and fourth, the Director of the School. The role of the Community was limited to financial contributions and moral endorsement but excluded any input into the curriculum. In fact, the European Schools were financed by the Community and the member states.

The complementarity of national identity and a European disposition

‘(…) Each of these pupils will be able, whilst following with teachers from his own country the study of his [sic] mother tongue and his national literature and history, to acquire from infancy the use of other languages and benefit from the joint contribution of the different cultures which together make up European civilization. Sharing in the same games, grouped in common classes, boys and girls of various languages and nationalities will learn to know and value each other and to live together. Being brought up in contact with each other, and freed at an early age from the prejudices which divide (…) they will (…) While retaining love for and pride in their country (…) become Europeans in spirit (…).’

The foundation stone shows the importance that the Community placed on both safeguarding the Community children’s national cultures and heritage as well as the development of their European way of life. The desired co-existence of both national and the European dimensions was particularly manifest in the European School’s curriculum in five main ways: first, the curriculum was based on the ‘principe de la priorité absolue de la langue maternelle’ (the principle of the absolute priority of the native language). This showed that national identity and its linguistic and cultural aspects were to be safeguarded and developed not marginalised or even ignored and forgotten. In fact, the Community emphasised that the European School provided an opportunity to develop a European identity all by maintaining one’s national identity. Second, the curriculum was harmonised. This meant that all linguistic sections (primary and secondary school) had the same timetable and study according to a common syllabus which would focus on both European and specific national aspects of the bespoke subject. In secondary school though, children were increasingly taught together according to subject rather than linguistic sub-section. Third, particular emphasis was placed on language learning – students could become trilingual or even quadrilingual. Fourth, from year 3 onwards, during ‘European Hours’ students from different linguistic sections would be mixed and encouraged to cooperate by undertaking more creative and practical tasks in order to make it as natural as possible for children from different backgrounds to play with each other, build friendships and to recognise each other as equals (see also the 1980 Report on the Statutes of the European Schools). Fifth, the extent of extra-curricular activities available to the Community children. These included a variety of different sports as well as more art-related activities and were seen as particularly apt in achieving four things: (1) imparting knowledge; (2) developing the linguistic, communicative and social skills that will enable pupils to live and work within Europe; (3) encourage the development of certain civil attitudes; and (4) promoting European values such as democracy, human rights, freedom and equality.

Of course, the European Schools also faced challenges in their day-to-day teaching. These were three- fold: first, problems linked to the high academic standard, language learning and workload; second, the challenges faced by teaching staff in terms of a strenuous and at times contentious curriculum and third, given everything else a surprising lack of appropriate schoolbooks that reflected the Schools’ particular European teaching and values.

These schools were seen as being able to bring together children with different national cultures, attitudes and outlooks, different cultural predispositions as well as different attitudes, values and priorities around a common European focus. It was believed that these Schools could help the Community children to develop a European civil consciousness, that is a feeling of belonging to Europe grounded in daily experiences with other ‘little Europeans’.  In other words, the European Schools would create a civil microcosm in which children would be educated to behave according to acquired European civil norms and values. In this way, they were a concrete manifestation of Civil Europe brought about by a far-reaching educational undertaking that married idealism and pragmatism in an unprecedented manner.

Today there exist thirteen European Schools in six EU countries and a further nineteen accredited ones in twelve countries. There isn’t much interaction between them and national schools. Whereas it was hoped that national school systems would learn from and integrate the European Schools’ approach to multiculturalism and to foreign language teaching, they remained in ‘academic isolation’ largely because the national school systems only consider them institutions for precise and limited purposes, that is, the education of future Community officials; when they were so much more.