From the closing decades of the nineteenth century to the early twentieth century, Dadabhai Naoroji (1825‒1917) was India’s foremost intellectual celebrity — by the end of his career, he was known as ‘the Grand Old Man of India’. He spent most his life moving between western India and England in various capacities — as social reformer, academic, businessman, and politician. His life’s work was the redress of the inequalities of imperialism through political activism in London, at the heart of the British empire, where colonial policy was formulated. This project brought him to Westminster, where he became Britain’s first Indian member of parliament (MP). As a Liberal Party MP, he represented the constituency of Central Finsbury, London, from 1892 to 1895. Above all, he used the political structures, concepts, and language of the British empire to reshape it from within and, in this way, improve India’s political destiny. 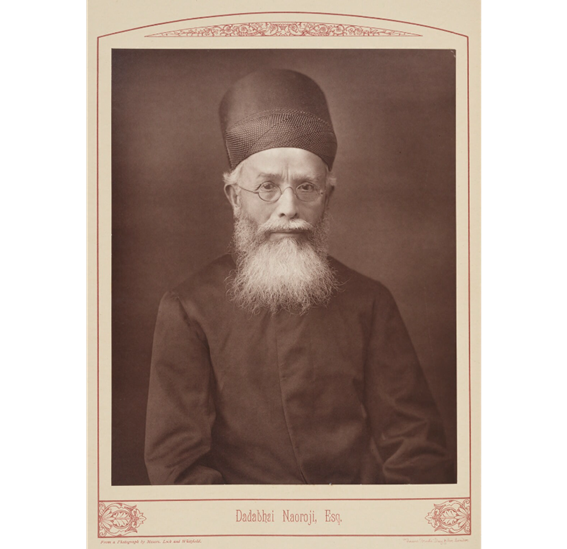 Naoroji wears a phenta, the distinctive conical hat of the Parsis. While he initially wore it in London, he largely abandoned it after 1886. This sartorial change was linked to his first attempt to reach Westminster, as one of his British collaborators advised him to switch to European hats. He ignored this advice: he mostly opted for an uncovered head, thus rejecting the colonial binary of the rulers versus the ruled. Source : National Portrait Gallery. 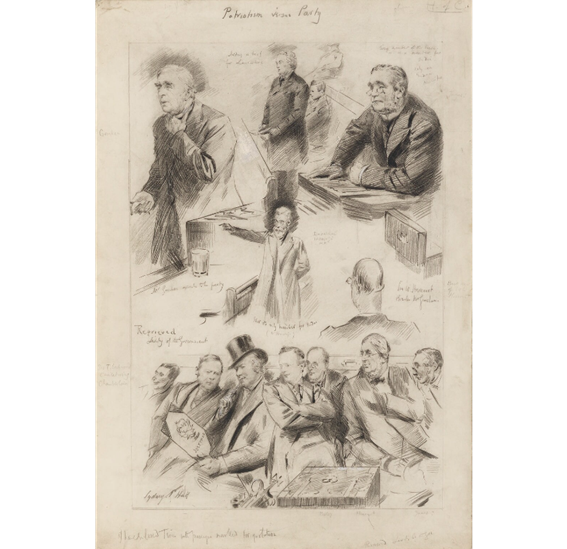 Debate on the Indian Council Cotton Duties. by Sydney Prior Hall, published in The Graphic, 2 March 1895.

Dadabhai Naoroji stands at the centre of the composition, with his right arm outstretched. Hall chose to depict him on a smaller scale than the British politicians who surround him. Source : National Portrait Gallery.

The making of a social reformer, as a scholar and a businessman

Dadabhai Naoroji was born in 1825 in Bombay, into a small but influential ethnoreligious minority — the Parsi community. Since the early modern period, Parsi merchants and businessmen had occupied powerful intermediary positions as brokers for colonial interests. While Naoroji belonged to a priestly lineage, his parents were of modest means: before his birth, they had moved from Gujarat to Bombay in search of work. With the death of Naoroji’s father when he was only four years old, he was raised by his mother, who remained a widow. She enrolled him in a school established by the Native Education Society, which provided free English-language education. He earned a scholarship to study at Bombay’s Elphinstone College, a British-administered higher education institution, and in 1845 became one of its first Indian graduates.

In 1854, he was appointed professor at Elphinstone College — the first Indian professor in any British-run college in India. He began to play an active role in Bombay’s rich association life: he helped to establish the Widow Marriage Association (1861), which aimed to improve the social status of widowed women, and the Bombay Association (1852), which paved the way for a powerful force in India’s anticolonial politics, the Indian National Congress (INC). In 1855, he resigned from his professorship to go into business. Along with two Parsi associates, he set up Cama & Co., the first Indian firm in Britain, where he would live for the next two decades. After quitting Cama & Co. on ethical grounds — because the firm’s trade in opium and alcohol clashed with his temperance views —, he established his own cotton trading company. He also returned to academia, serving as professor of Gujarati at University College London (1856-65).

After a decade in Britain, he became increasingly concerned with one idea: India’s growing impoverishment under British rule. Employing the statistical evidence of colonial officials, Naoroji argued that the British empire had turned India into the poorest country in the world. He went on to popularise the influential “drain of wealth” theory, which posited that Britain was impoverishing India through the unilateral transfer of wealth from the colony to the metropole. In this way, he dismantled British claims of benevolent imperial rule — and he did so by using the very data, tools, and language of the colonisers. To advance his critique of colonialism and push for imperial reform, he created new spaces of debate on India in the metropole: he helped to establish the London Indian Society (1865) and the East India Association (1866), which aimed to influence British policies towards India.

By 1874, after nearly two decades in Britain, Naoroji had earned a reputation as a social reformer and liberal thinker. This resulted in an invitation to move to Gujarat, the land of his Parsi ancestors: Maharaja Malhar Rao of Baroda, ruler of the leading princely state of western India, wished to appoint him as the state’s diwan (prime minister). Naoroji spent two years in Baroda, reforming the state’s administration and attempting to put an end to corruption. His efforts were in vain, as the British deposed and exiled Malhar Rao in 1875. Naoroji resigned as diwan and moved to Bombay, where he served as a member of the city’s Municipal Corporation.

The making of a member of parliament

In 1885, Naoroji was among the founders of the INC, which he would preside in 1886, 1893, and 1906. As many of his INC contemporaries, he firmly believed in working through existing imperial institutions. After moving back to Britain, he put this strategy into practice with more zeal than any of them, and in the most imperial institution of all — Westminster. Due to the absence of a clearly-defined policy on citizenship, it was possible for a British colonial subject to stand for a seat in a British constituency. Naoroji took advantage of this ambiguity: he ran for Parliament on four occasions — in 1886, 1892, 1895, and 1906 — across a period of twenty years. He obtained a single electoral victory, which brought him to Westminster in 1892 as a Liberal MP for Central Finsbury, in central London.

In the British general election of 1892, Naoroji campaigned on Irish Home Rule, as well as on reforms that responded to the demands of Central Finsbury’s working-class electorate. He enjoyed the backing of British socialists, labour leaders, and members of the women’s suffrage movement, as well as Irish nationalists — progressive allies who by and large lent their support to Indian aspirations of swaraj (self-rule). He obtained financial support from Maharaja Malhar Rao’s successor in Baroda, Sayaji Rao Gaekwad III. Eager to burnish his liberal reputation, the Maharaja donated £1,000 to Naoroji’s campaign — and later made further financial contributions during Naoroji’s tenure as MP and retirement.

After his 1892 victory, the newly elected MP was well aware of the far-ranging, imperial dimension of his achievement: when Naoroji addressed his constituents, he thanked them for having helped India ‘obtain a voice in the Imperial Parliament’. When he was sworn in he refused to take the oath on the Bible, using instead his copy of the Khordeh Avesta — a sacred text in the Parsi Zoroastrian religion.

During his time in Westminster, Naoroji became involved with local progressive organisations, temperance societies, and feminist and women’s suffrage circles. He also used his position to gain a wider audience for his longstanding critique of colonialism, continuing to press for political change in India. His demands for Indian reform, however, garnered little support in Westminster beyond the Indian Parliamentary Committee, a pressure group on behalf of India he had co-created. The most substantial result of Naoroji’s parliamentary career did not come until 1895, when his campaign against Britain’s financial drain of India led to the creation of the Royal Commission on Indian Expenditure, which aimed to improve the Indian economy by reducing the mismanagement of British expenditure in the colony.

Naoroji lost his seat in the general election of 1895, which saw a major Conservative victory across Britain. He remained in London and returned to the “drain of wealth” theory, launching a renewed economic critique of colonialism in his influential Poverty and Un-British Rule in India (1901). Naoroji’s pointed arguments were followed by Indian economists, journalists, and politicians — and remain powerful in informing popular understandings of the legacy of British rule in India to this day.

In 1906, at the age of 81, Naoroji stood as MP for the fourth and final time. He was unsuccessful. A year later, he retired from politics and moved back to Bombay. He was disheartened by the slow pace of change in British policies towards India, as well as by the racism he faced from some sections of British society, both metropolitan and colonial. Naoroji’s lifelong liberal political project, however, was not in vain. His ceaseless agitation between Bombay and Westminster helped to bring about changes in British rule in India. Liberals, Radicals, socialists, Irish nationalists, Pan-Africanists, feminists, temperance activists, and other reform-minded individuals left their encounters with Dadabhai Naoroji with a deeper understanding of the inequalities of imperialism. In this way, through the imperial critiques he articulated in his writings and his direct participation in parliamentary politics, Naoroji was instrumental in popularising Indian swaraj across the British empire and beyond.