Education in a colonial environment

The example of New Caledonia under the Third Republic

The école indigène (the indigenous school system) in New Caledonia under the Third Republic is a difficult subject to grasp, given the sharp contrast between a version of history that insists on the benefits of missionary work, and the Kanak collective memory of an institution that was first and foremost devoted to upholding the iniquitous colonial order. Over the last twenty years, a historiographical renewal has enriched historical sources, with a view to better understanding an indigène policy long associated with a wait-and-see approach. The search for a memory of l’école indigène that is attentive to how the colonial project was received by those for whom it was intended underscores the gulf separating its intentions from its realization. By shifting focus, this history in equal parts can expand our understanding of contemporary issues relating to the postcolonial dispute. 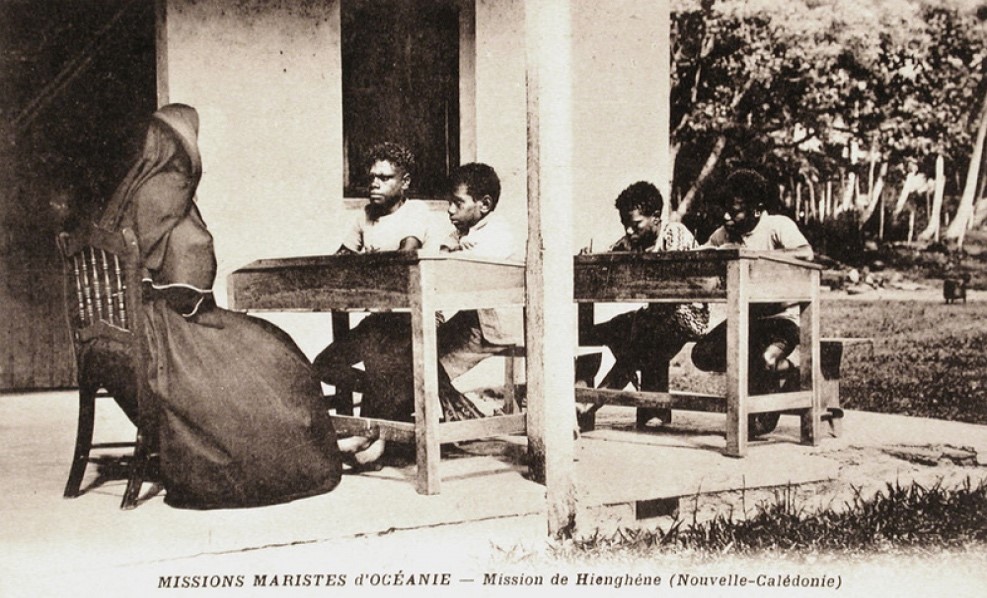 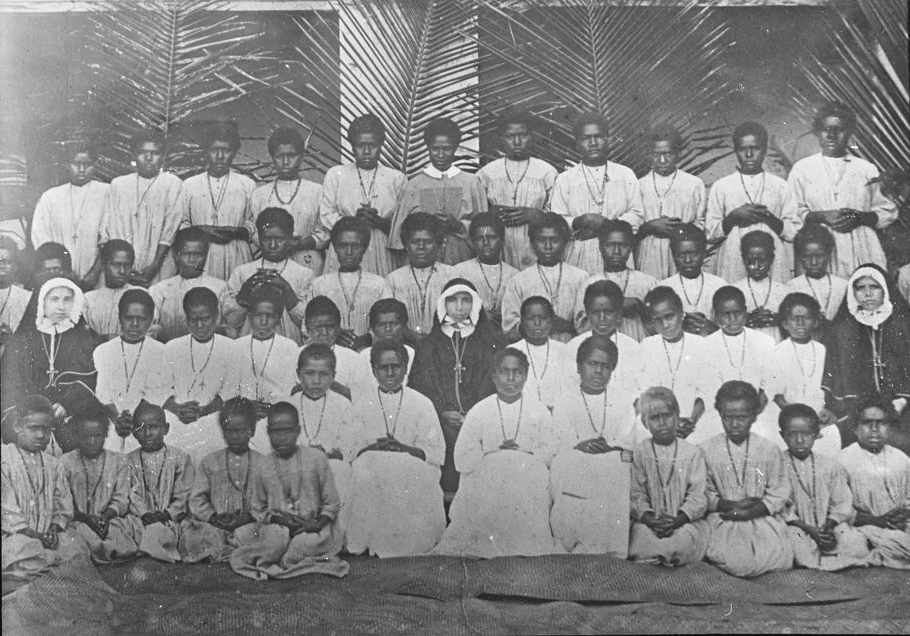 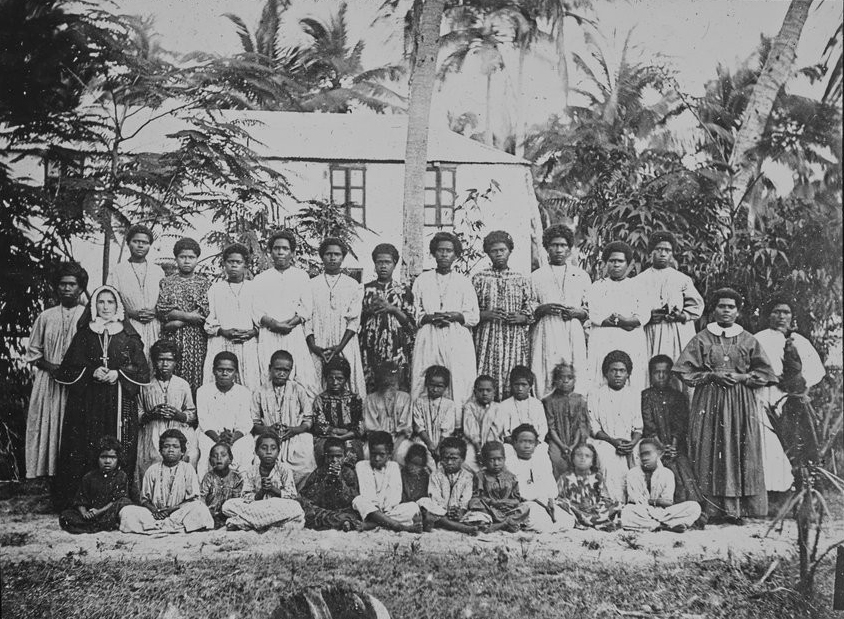 New Caledonia was an atypical colony in the French colonial empire, as it was a settler colony, whereas other French possessions—with the exception of Algeria—were colonies of exploitation. In accordance with successive projects in Paris, New Caledonia was first conceived as a penal colony, before ultimately becoming a farming and mining colony. Finally, the unprecedented treatment of its first inhabitants, the Kanaks, who were confined to reservations from the late nineteenth century onward, sets New Caledonia apart from other French colonial territories. This isolation, and the ill-defined role of natives in the development of a colony destined for white settlement added to the fundamental ambiguity of any school policy within a colonial setting, for teaching was never a simple overseas extension of what was planned for the metropole. The republican school in France was ascribed a dual goal after 1881. The first was quantitative: universal suffrage involved educating all citizens, which justified the fact that school was compulsory and, as a consequence, free. The second was ideological: widespread instruction represented, in the eyes of republicans, the best shield against the traditional influence of the conservative right and clerics. However, in colonies there were no citizens, as the goal of “civilization,” that was supposed to benefit the empire’s subjects, was to subject them rather than to further the cause of democracy, let alone emancipate them. Secularism was far from being an export product: in New Caledonia more so than elsewhere in the empire, one can speak of a delegation of public service to Catholic and Protestant missionaries, given their central role in the “civilizing mission.”

A history that was long Eurocentric and incomplete

Until recently, the historiography was content with using written archival sources, documents, and accounts that—no matter how much they taught us—only express the point of view of Europeans, and always present themselves as a vindication for the missionary work undertaken with natives. Biographies of religious staff, tales of the “charitable work” performed with “naturels” (Natives), and reminders of the great deeds of particular individuals facing the “pagan masses” all stand in for the history of l’école indigène. In these sources, the Kanaks are described as being subject to an “acculturation” that would teach them the benefits of modern life, and do away with the specter of primitiveness from which Whites had saved them. Little did it matter whether it was with or against their will, or whether they were capable of innovation, appropriation, or defiance. This difficulty in historicizing the indigenous experience is not foreign to the institutional division of labor in research, as anthropologists and ethnologists enjoy a monopoly over analyzing traditional society (its myths, relations, social organization, etc.), while historians are tasked with describing the actions of France and its agents. By focusing exclusively on missionary work, this history made New Caledonia the only colony in which public authorities were totally disinterested in the education of natives, abandoning them to their fate or, more precisely, to the proselytism of missionaries. A historiographical renewal has seen the integration of sources that had not been previously used (sessions from the local council, staff registers, reports from the Inspection générale des Colonies, etc.), revealing the existence of public indigenous schools that fell under the remit of the Indigenous Affairs Department between 1885 and 1919, and then under the Public Instruction Department, albeit separately from the elementary schools reserved for the children of colonists.

The paradoxes of an over-schooled colony

Sharing with Aboriginal Australians the sad privilege of being seen as the lowest rung of humanity from the Western evolutionist perspective, the Kanaks of New Caledonia were actually overschooled in comparison to the school enrollment rates of other colonies:

While one may share the concerns of historians of education regarding the reliability of school statistics from the period, the dense missionary network set on the territory of indigenous reserves helped spread school attendance in proportions unseen in other parts of the colonial empire. However, these numbers should not conceal the comparatively very limited results, as pupils were only taught the curriculum set for the first three years of elementary school in the metropole. The only école supérieure (higher education establishment), established in 1913 for indigenous instructors, trained future schoolmasters, over the course of 3 years, until they reached a level theoretically comparable to that of holders of a certificat d’études primaires (certificate of elementary studies). The strict separation between indigenous schools and elementary schools—and the fact that Kanaks could not pass examinations or pursue degrees reserved for colonists’ children—were effective barriers for maintaining indigènes in their place. It was not until 1962, 17 years after the official end of colonization, that a Kanak earned a baccalauréat (high school) degree.

French schools, as well as their programs and teachers, were strongly challenged by the Kanak separatist demands that emerged in the 1970s. This dispute can only be understood by considering voices that explore the Kanak memory of schooling. This principle of epistemological justice restores complexity to colonial interactions, and sheds light on the ambiguous relation of Kanaks to schools, which were simultaneously rejected and ardently desired. Accounts by former students encourage us to put the strictly scholastic function of l’école indigène into perspective, as their first recollection is not the learning of reading, arithmetic, or writing in French, but rather the multitude of disciplinary techniques designed to inculcate a different way of being. While schools were intended to protect native children from an environment deemed corrupting, as well as to transform them as radically as possible into “civilized” beings, they nevertheless had the mission of carrying out a hypothetical assimilation. The collective memory of l’école indigène shows that the eminently practical and limited nature of the instruction received—and hence its difference from schools for white children—did not escape former students, who retrospectively expressed having the feeling that they were “forbidden from learning.” Behind the official objectives of education and civilization found in administrative and missionary archives, accounts show the meticulous “dressage” (training, taming) that children were subject to, as though memory had obscured the purpose of the activity in favor of the technical details of its implementation. Instilling discipline in bodies and minds—which in theory should have been no more than a means of implementing a project of programmed acculturation—emerges as the only possible horizon for the schooling endeavor. The colonial legacy is neither simple nor unequivocal, as demonstrated by the great distance that remains between apologetic scenes emphasizing the beneficial role of colonization and the painful accounts of former students.