Mamadou Racine Sy, first black soldier in the service of France to rise to the rank of captain (1883) and to be conferred the rank of Officer of the Legion of Honor (1888), was an exception among the many soldiers recruited by the French army in West Africa (the “tirailleurs sénégalais” or Senegalese riflemen) during the colonial period. His personal record – kept at the French military archives – as well as the photographic portraits of him that have survived, distinguish him from the tens of thousands of anonymous tirailleurs who fought in the French uniform between 1857—when Faidherbe created the first battalion of Senegalese tirailleurs—and African independence. Mamadou Racine, who acted as a soldier, an interpreter, a diplomat and an administrator, was instrumental in the French colonization of Senegal and Sudan during the second half of the nineteenth century, although the archives show the great reluctance he had to overcome in order to earn his stripes and awards. 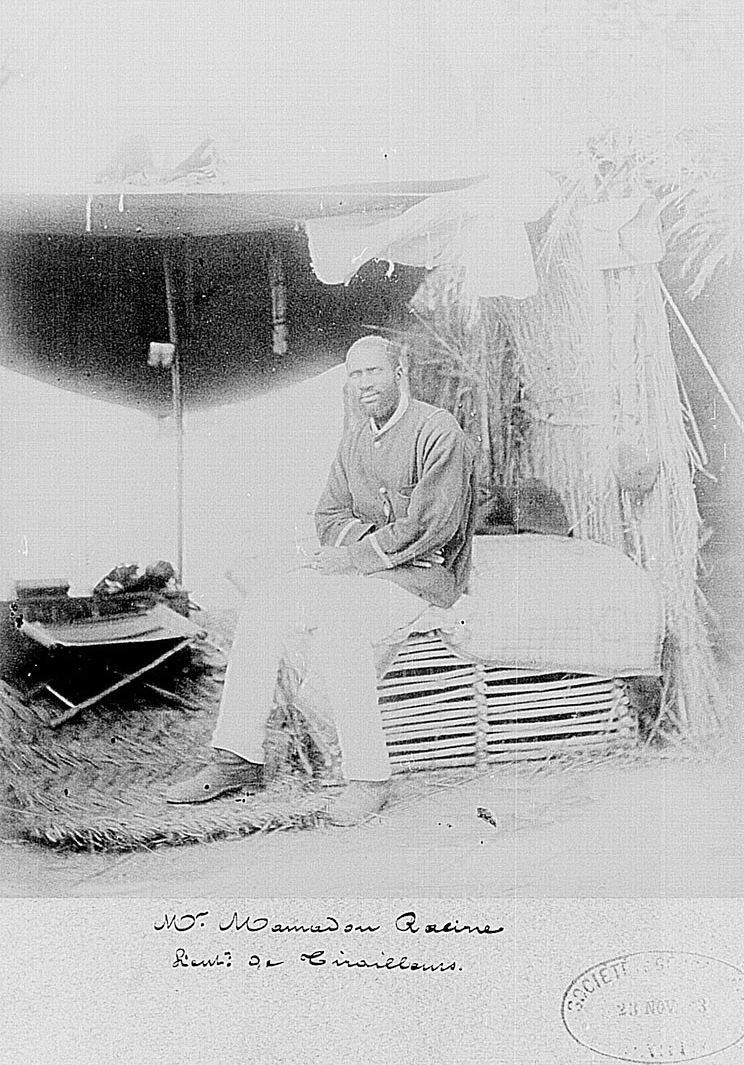 Photograph of Mamadou Racine when he was a lieutenant au titre indigène (indigenous lieutenant), during the Borgnis-Desbordes mission in Senegal and Sudan in 1883. Source : Gallica. 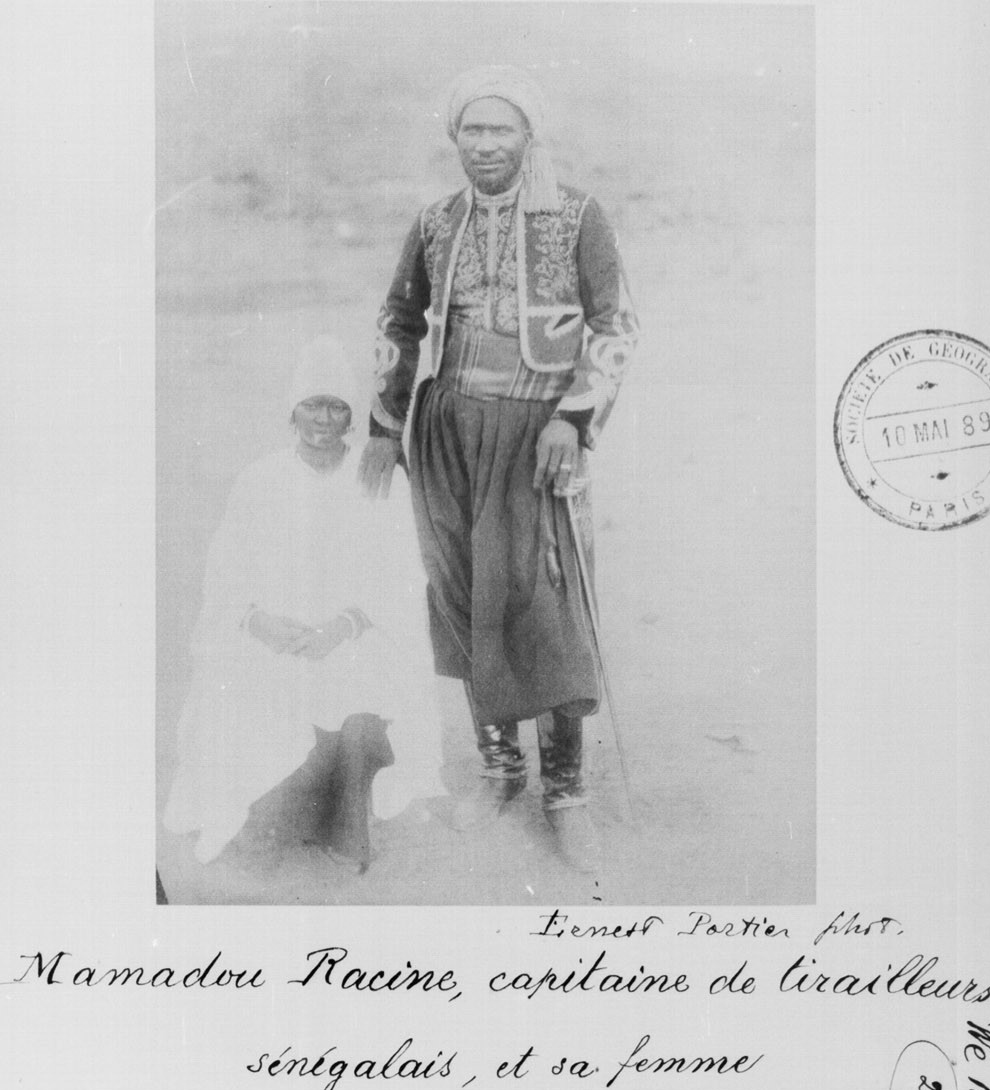 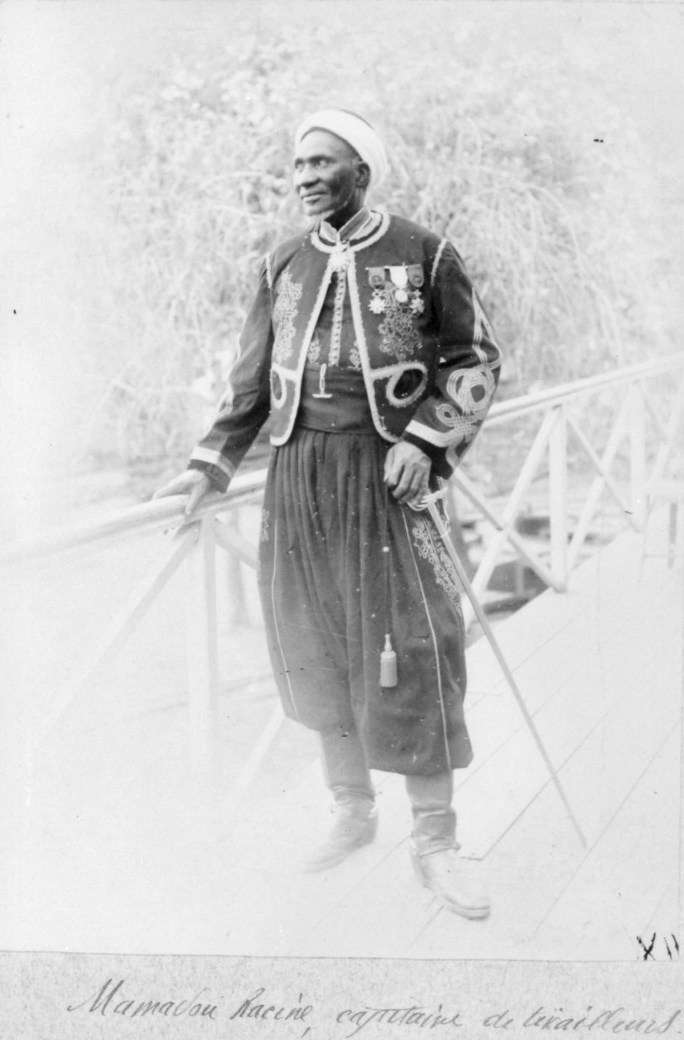 Photograph of Mamadou Racine between 1897 and 1900, taken by Captain Aristide Pérignon. Source : Gallica. 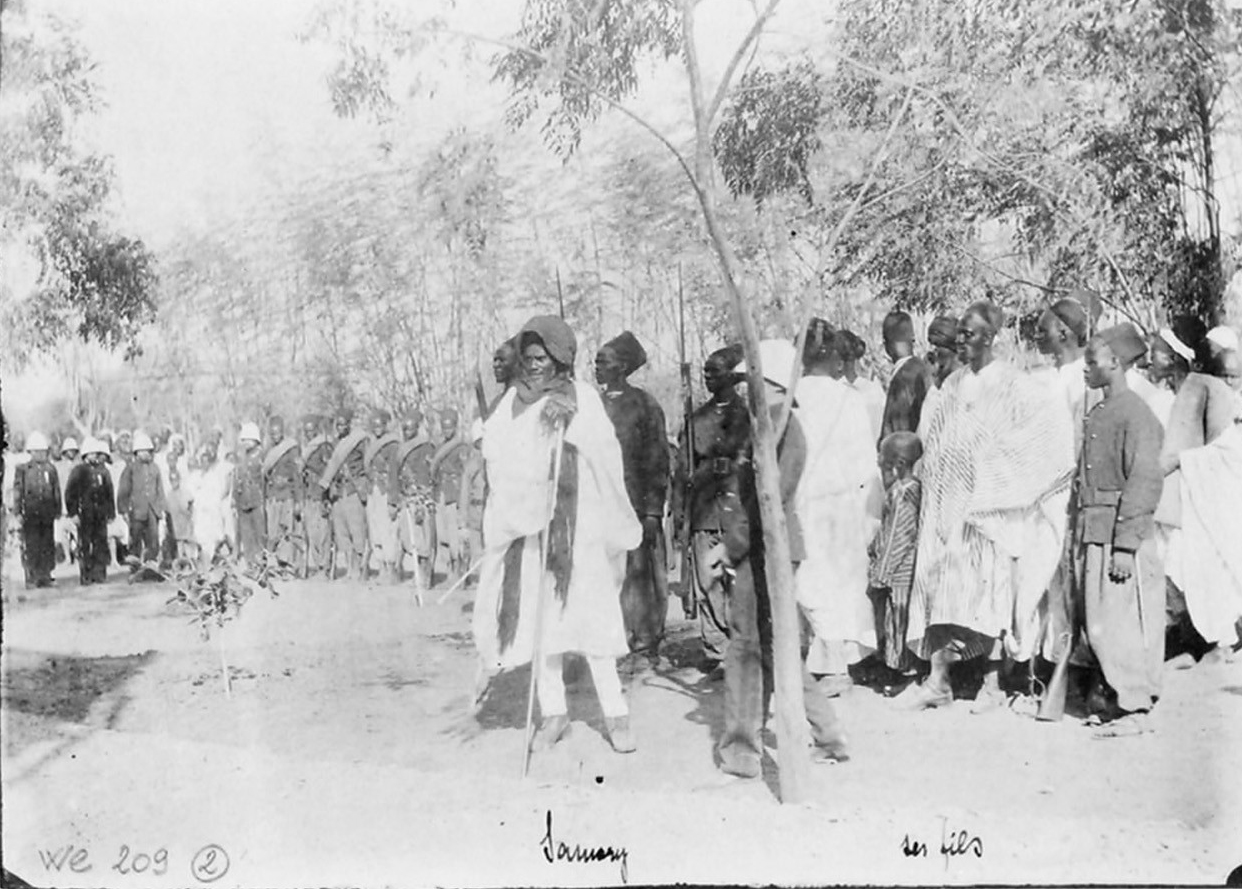 Samory listening to his sentence of exile (translated by Mamadou Racine) in front of the government palace in Kayes in 1898. Source : Gallica.

Mamadou Racine was among the rare African auxiliaries of French colonization whose name and image have not faded from memory. He was famous in colonial circles of the second half of the nineteenth century, and according to Captain Alfred Guignard, he was a “hero of black troops as well as the Sudanese epic, whose name appears on every page of our conquest.” Still, there are many unknowns regarding his life, as he left no writings others than a few letters and reports addressed to his hierarchical superiors. The oral family tradition collected by his grandson and biographer Mamadou Sy did not shed light on certain aspects of his life, which the historian must try to grasp via sources written exclusively by the colonizers. Mamadou Racine’s extraordinary career did not shield him from the many biases and gaps that characterize the history of “indigenous” auxiliaries in French colonization.

Mamadou Racine’s file presents a number of variations with respect to his personal records. His first name was for a time spelled “Mahmadou” by French officers, an error that he rectified in 1888 in an official letter. His last name, Sy, does not appear in any military document. Neither the date nor the location of his birth is known for certain (he was apparently born in 1838 or 1842 near Podor, Senegal), and his regimental number changed three times.  However, we do know some details regarding his pre-regiment life. He was the son of Élimane Racine, the village head of Suyuma, who had good relations with the French colonizers. On the side of his mother, Seynabou Rabi Bâ, Mamadou Racine was related to the nobility of Bosséa, a region in northeast Senegal. After pursuing religious studies, Mamadou Racine served for a time as the head of a Koranic school, before enlisting in 1860 as a simple soldier in the Senegalese tirailleurs corps, which had been created three years earlier by General Faidherbe. Nothing helps explain this decision, although Sy family tradition attributes it to an argument between Mamadou Racine and his father, who apparently even sent ten youths in his service to the Senegalese tirailleurs corps in order to buy back his son, albeit in vain.

Between 1860 and 1895, when he retired, Mamadou Racine gradually climbed the military ranks by taking part in most conquest operations, initially in Senegal against the head of the Toucouleur Empire Ahmadu Sekou and his ally Lat Jor, and later in Sudan against Almamy Samory Touré, who led a powerful state in the Niger region. He distinguished himself in 1883 during the taking of Fort Daba, where he was wounded in the thigh. He was also present during major battles, such as those of Koundian in 1889 and Segou (Ahmadu’s capital) in 1890. His record traces the major stages of his promotion through feats of arms. He was made a corporal in 1865, a sergeant on August 9, 1866, and in 1868 rose to the rank of sous-lieutenant indigène (indigenous sublieutenant), which at the time was the highest rank in the career of a tirailleur. However, his rise slowed from this point forward, as it took twelve years for him to be promoted to lieutenant indigène (indigenous lieutenant) in 1880, due to a lack of available positions (there were very few indigenous officer positions in Senegalese tirailleur companies). The three years separating his promotion to the rank of lieutenant and his appointment as a captain can be explained by the great reluctance on the part of French senior command and military institutions, as demonstrated by the letters kept in his personnel file. Since Mamadou Racine was not a French citizen, he could only serve as an indigène. The decree that created the Senegalese tirailleurs corps originally did not provide for an indigène captain; this omission was not by chance, as military authorities did not want to place French non-commissioned officers under the orders of an African officer. Neither Mamadou Racine’s record of service nor his awards (he had been a Knight of the Legion of Honor since 1869) were initially enough to overcome this legal obstacle; it took the insistence of General Borgnis-Desbordes, in addition to multiple years of interministerial correspondence, for the rank of captain to finally be granted on an exceptional basis in 1883. He reported to the general staff of the High Commander for Upper Senegal, where he had no effective command, thereby de facto avoiding the primary obstacle to his promotion. In 1888, following another controversy, he became the first black person to be conferred the rank of Officer of the Legion of Honor.

An Ambiguous and Intermediary Colonial Figure

Mamadou Racine is—in much the same manner as the local guides and interpreters whose work was essential to the colonizers—an indigenous intermediary of colonization. As soon as he was enlisted as a tirailleur, he understood the need to learn how to read and write French, which he soon mastered. In 1878, he was allowed to travel to the Paris World’s Fair. During campaigns, he quickly adopted the codes of sociability in effect among French colonial officers, whom he hosted in 1890-1891 with “an excellent table, perfectly served in the European manner.” While he was at ease with European codes, Mamadou Racine retained certain Muslim customs. For example, we do not know the exact number of his spouses (his enlistment form simply indicates that he was married “according to the custom of the country”). One of them, Mariam Inaysa, the daughter of Ahmadu Sekou, was given to him by Archinard after the taking of Segou in 1890, in accordance with a widespread custom in the French colonial army. A model soldier, Mamadou Racine also acted as a guide, an interpreter, and a diplomatic intermediary, especially with Samory, who was then allied with the French, and who put his son Karamoko in Mamadou Racine’s care during his trip to France in 1886. A few years later, in 1898, he was tasked with translating for Samory—who was then a prisoner of the French—the sentence of exile to Gabon issued by the governor Trentinian. Considered as a perfect example of assimilation, Mamadou Racine nevertheless sparked suspicion among a number of French officers who looked unfavorably upon his professional rise and criticized his enrichment, especially Gallieni who deemed him “more bothersome than useful.” In 1872, he was reprimanded for leading prayers in the mosque at the Bakel post, wearing a boubou. After his retirement in 1895, Mamadou Racine continued to serve the French as fama (king) of Bambouk, an honorary position that primarily involved transmitting the instructions of French administrators to the local population.

Mamadou Racine died on February 24, 1902 in Kita. In 2011, his tomb was transferred to the military cemetery for French soldiers, at the request of his family. A major actor in the conquest of Senegal and Sudan, Mamadou Racine has been doubly obscured in French and Senegalese memory. In France, he is part of the anonymous cohort of indigenous colonial auxiliaries, whose memory was obscured by the figures of major white colonizers. In Senegal, his name does not appear in textbooks for contrary reasons, as he is seen as a collaborator of the French, and an enemy of the primary heroes of the resistance against colonial conquest.