During the interwar period, fascist or quasi-fascist regimes wanted to restore a traditional gender order that they saw as being under threat. Nevertheless, feminist organizations were late in sensing and countering the fascist danger. Such organizations were dissolved in Italy, Germany, Spain, and Portugal, and their members forced into hiding or exile. International feminist associations were also unable to oppose the rise of fascism, with the exception of the Women’s International League for Peace and Freedom, which alongside the Communist International was behind the constitution of a large transnational organization of antifascist women, the Women’s World Committee Against War and Fascism. The Spanish Civil War and fascist aggression in Ethiopia and Central Europe were a turning point, as the division between integral pacifists and antifascists jeopardized longstanding feminist solidarities. 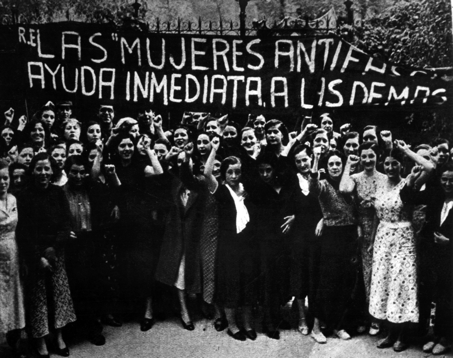 Demonstration of the organization Mujeres Antifascistas (Antifascist Women) under the Spanish Republic. DR.

The interwar years were marked by the rise of fascisms and the accession to power of totalitarian dictatorships. The latter relied on different fears and anxieties ranging from Bolshevization, the loss of markers of identity, the economic crisis, and demographic collapse, as well as the “confusion of the sexes” and the “feminization” of society, which were accused of causing decadence, a decadence that was seen as being particularly intense in the nations defeated at the end of World War One. The influence of feminism and its success, notably obtaining the right to vote (Germany, 1918, Great Britain, 1928, etc.), were also linked to this reaction toward respecting the traditional gender order. In a context of the militarization of society, these authoritarian regimes combined natalist policies and repressive measures aiming to increase their demographic power, to confine women to the traditional role of spouse and mother—as postulated by the National Socialist Weltanschauung (worldview)—and to promote a virile form of authority. The progression of fascism, whether in Italy, Portugal, or Spain, along with its key expression in the National Socialist regime in Germany, was accompanied by a visceral antifeminism, with nuances varying in accordance with the country. In Italy, Mussolini initially lured women with the illusion of their association with political decision-making through the vote. However, in 1926, he cancelled all forms of elections, and asserted that women’s place was not in the political arena. The Nazis never obscured the profoundly masculinist roots of their ideology, which conceived the nation as a Männerbund (community of men), in which the primary function of women (exclusively Aryan women) was to reproduce the race and keep the household.

Feminists were late to react to this danger. The fascist discourse that overvalued maternity could seem to echo a differentialist “new feminism” that appeared during the 1920s, and that demanded specific rights for women according to their maternal role. In Italy, some feminists, like many other women, were tempted by the fascist adventure; in 1927, the journalist Ester Lombardo (1895-1982) could declare that “the feminist movement in Italy no longer exists […] engulfed by the fascist revolution.” In Germany, nationalist völkisch sympathies (a populist and racist ideological trend) brought certain feminists closer to the National Socialist party, although the Bund Deutscher Frauenvereine (Federation of German Women’s Associations) dissolved itself in 1933 to avoid being used by Nazism. Feminist organizations were forbidden under these regimes, and the majority of their members, who were forced into hiding, resisted as part of antifascist groups, where their feminist engagement took on secondary importance. Women’s organizations established and controlled by the fascist states, such as the Sección Femenina [Women’s Section, a branch of the Spanish Falange] or the Deutsches Frauenwerk [German Women’s Work], had the explicit goal of undoing the progress achieved by the feminist movement, and putting women back in the place intended for them.

On the European level, three major international feminist organizations were active during the interwar period: the International Council of Women (ICW) founded in 1888, the International Woman Suffrage Alliance created in 1904 (which became the International Alliance of Women for Suffrage and Equal Citizenship, IWSA/IAWSEC), and the Women’s International League for Peace and Freedom (WILPF), established in The Hague in 1915. They also appear to have been caught unprepared by the rise of fascism, and some even to have lacked coherence, although Hitler’s rise to power in Germany and the confinement of women to their reproductive role prompted sharp criticism. Rather than directly oppose fascism, these organizations defended peace and disarmament. Feminists actively took part in the Geneva Disarmament Conference from 1932-1934, which nonetheless ended in failure.

The strongest feminist reaction to fascism, and especially to National Socialism, was that of the WILPF, which was the only organisation with both a feminist and antifascist discourse. It openly denounced the antifeminist character of this ideology, as well as the threats it posed to all societies. Its French branch, led by Gabrielle Duchêne (1870-1954), played a crucial role in the creation of the Women’s World Committee Against War and Fascism in Paris in 1934, which was done under the auspices of the communists, but which brought together women of diverse backgrounds in a common struggle. The French branch numbered as many as 200,000 members, surpassing the Belgian, Swiss, Spanish and English branches. This committee participated in support efforts for Italian and German exiles, as well as in the denunciation of Nazi barbarism and sounding the alarm regarding the rise of fascism in Spain. Its dynamism, however, hid the crisis troubling feminists—even within the WILPF—who were divided between “doctrinaire pacifists” and “realist pacifists,” the latter being more drawn by the antifascist struggle than by a defence of integral pacifism.

Beginning in July 1936, the Spanish civil war was seen as the frontline of the battle between fascism and antifascism, and also represented a turning point. Feminist intellectuals such as Simone Weil (1909-1943) supported the Spanish Republic, which had granted women the vote in 1931. While the Women’s World Committee unambiguously committed its support to the republican combatants and the International Brigades, the feminist movement was torn between those who condemned all war in the name of pacifist values, and those who showed their solidarity with the republicans who had taken up arms to fight against the nationalists. Feminist organizations were helpless in the face of increasing military aggression by Italy in Ethiopia (1935) and by Germany in Austria, Sudetenland, and Czechoslovakia (1938), and could do no more than note their inability to prevent war.