The religious crises connected to Jansenism affected the careers of many early eighteenth century French engravers, who either went into exile, or served as the secret correspondents of French engravers who had settled in England or Holland, which became platforms for the diffusion of polemical engravings. In the 1760s, the participation of French engravers in clandestine Jansenist initiatives compelled them to emigrate definitively, or to stay abroad for many years. Once they emigrated, they often completely changed their artistic orientation. 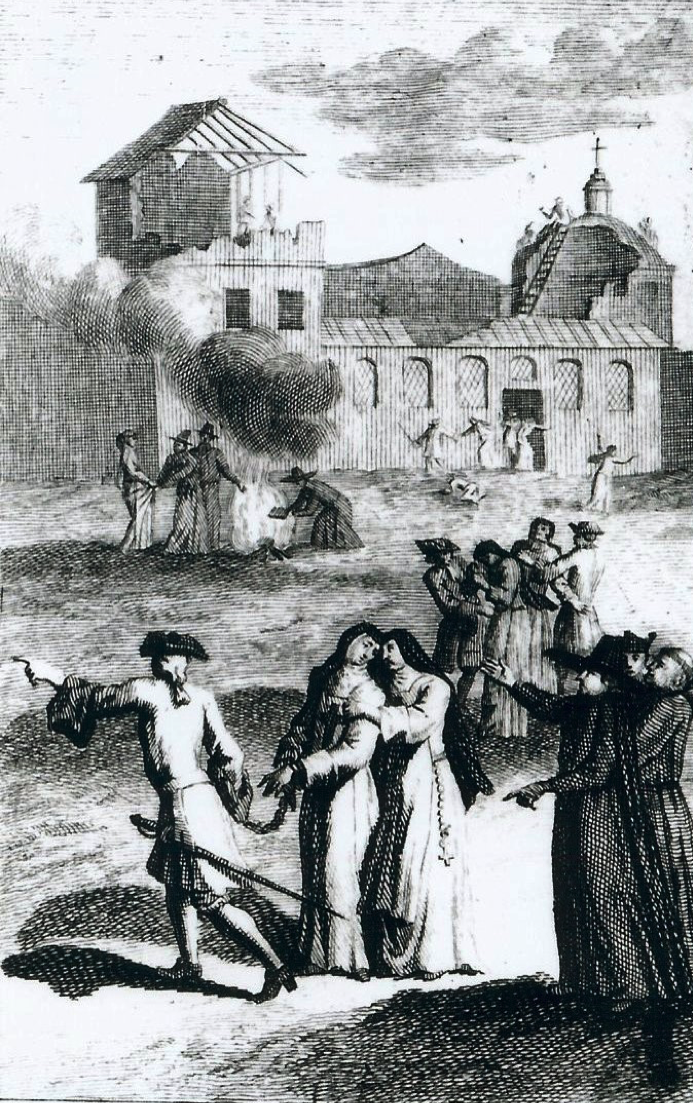 Jansenism, a theological movement born around 1640 in the Port-Royal de Paris monastery’s sphere of influence, was initially a trend within Catholicism following the doctrines of Saint Augustine of Hippo on predestination and grace. During the reign of Louis XIV, however, Jansenism also became a political sensibility that questioned the authority of the Church and accentuated the importance of individual conscience within the monarchy. The ensuing royal repression pushed many French theologians who had defended the movement to go into exile. The most famous were Antoine Arnauld (1612-1694), who left for Brussels at the end of his life, and Pasquier Quesnel (1634-1719), who joined Arnauld in exile in Brussels in 1684, and was later forced to leave for Amsterdam in 1703, where he remained until his death. The revocation of the Edict of Nantes was another factor that prompted artists to choose exile: some of them, who were from Protestant families, were “recent converts” who had rallied to Catholicism solely by force or out of prudence. Artistic emigration connected to Jansenism became more substantial in scope only in the early eighteenth century: first with the desire to eradicate Port-Royal at the end of Louis XIV’s reign, and the simultaneous destruction of the Abbey of Port-Royal des Champs beginning in 1709, and then with the promulgation of the papal bull Unigenitus in 1713, which condemned Pasquier Quesnel’s Réflexions Morales [Moral Reflections] and was imposed on the French clergy by the king. The majority of artists who emigrated were engravers. The religious conflicts of the sixteenth century had also accustomed them to the publishing (if not the invention) of politically-committed images intended to defend their convictions. Pressured by events, some engravers in the early eighteenth century once again committed themselves to creating engravings, which were much more numerous than during preceding centuries owing to the development of printing and the loose print, which was distributed and sold by hawkers or available at booksellers. These engravings were anonymous due to their illicit nature, and their authors and publishers were sometimes worried because of them. As a result, some preferred to emigrate.

The first was Bernard Picart (1673-1733), who was also the author of the first engraving denouncing the destruction of Port-Royal: Les religieuses enchaînées ou la Destruction de Port-Royal [The chained nuns, or the Destruction of Port-Royal], published around 1709. Picart belonged to a formerly Protestant family that converted to Catholicism during the seventeenth century. According to the Mémoires [Memoirs] of the bookseller Prosper Marchand (1678-1756), who went into exile in Holland shortly before him, the engraver was attracted by movements of Jansenist thought, but in France he also belonged to the first philosophical circles of “freethinkers.” This proves that his exile resulted as much from his religious convictions as  from a desire for freedom of expression, which he could not exercise in France. Picart initially attempted to go to Sweden in 1709 but was prevented from leaving by the Superintendent of the Bâtiments du roi [The King’s Buildings]. Through persistence he succeeded in obtaining a passport for The Hague in 1710, from there he went to Amsterdam, where he established a famous workshop which for years flooded France with polemical engravings defending Jansenism. He remained in contact with Parisian engravers, notably Nicolas Godonnesche (?-1761), who could engrave his drawings or print the copper plates Picart passed into France. It was thanks to Picart that European Jansenist engraving networks branched out very early in France and Holland, thereby creating long-lasting circulations during the 1730s and 1740s between artists and booksellers who had emigrated to the Netherlands and their counterparts in France. Moreover, Claude Dubosc (1682-1745), a French engraver from a Protestant background, emigrated to London in 1712, where he became a bookseller and merchant engraver in England, and had relations with Bernard Picart, whose prints he published. As a result of the emigration of engravers, Jansenist engraving networks were established on clearly determined European axes between Paris, London, and Amsterdam, axes that were simultaneously those of the distribution of seditious books.

Bernard Picart chose to emigrate, and the United Provinces were for him less a refuge than a land of liberty close to his country, with which he still maintained contact. But in the 1750s and 1760s, when religious disputes began anew in connection with the expulsion of the Jesuits from France (1764), other engravers appear to have been subjected to exile. This could have been the case for the engraver Antoine Radiguès (1721-1809). The beginning of his Parisian career as an author was marked by plagiarism and counterfeits that led to legal proceedings, but in the 1760s Radiguès engraved prints defending Jansenism. His commitment was possibly no more than circumstance, but in 1725 his father, Jacques Valentin Radiguès, illustrated the first Jansenist miracle of Madame Lafosse. Antoine Radiguès also made trips to Holland and England, which suggest that he had contacts since his youth with European Jansenist engraving networks. Be that as it may, he died in Saint Petersburg, where he emigrated permanently in 1764, possibly for economic but also certainly for political reasons. In 1765 Radiguès was joined in Saint Petersburg by Caspar Schwab (1727- ?), the Vienna engraver who was also a part of the Jansenist nebula in Paris between 1759 and 1765. At the time Russia welcomed numerous foreign artists, who were encouraged to emigrate in order to train their Russian peers on site. For the engravers engaged in the Jansenist dispute, this opportunity was yet another assurance of escaping legal prosecutions and starting a new career in a faraway sanctuary.

Many engravers involved in Jansenist networks stayed in the Netherlands and England. For instance, Hubert Gravelot (1699-1773) stayed in London for at least thirteen years, from 1732 to 1745, and possibly in the United Provinces as well. Yet Gravelot—who is known more for his rocaille prints—was the creator of engravings against the Jesuits, such as the Vie de dom Palafox of 1762. These types of engraved series were most often drawn to illustrate the biographies of edifying figures, such as Palafox (1600-1659), who had clashed with the Jesuits when he was the bishop of New Spain (modern-day Mexico). They were requested by the same backers who had been involved in the Jansenist dispute between the 1720s and 1740s. Also worthy of mention is Jean-Pierre Norblin de La Gourdaine (1845-1830), who in the 1760s took part in a number of undertakings involving polemical engravings directed against the Jesuits. Like Schwab and Radiguès, he contributed engravings to the collection entitled Figures historiques symboliques et tragiques pour servir à l’histoire du xviiie siècle [Symbolic and Tragic Historical Figures to Serve for the History of the Eighteenth Century] published beginning in 1762 by Pieter Yvert, a former student of Picart. This collection used images to denounce Jesuits and their depravity, contrasting them with the purified religion of Jansenist figures. Norblin de La Gourdaine, who is famous today for his genre paintings and landscapes, thus had a first “Jansenist” career. He too lived outside of France for many years, in London and Dresden, before finally settling in Poland in 1774, where he remained until 1804