Born in 1417 as part of an epistolary exchange in Latin between Francesco Barbaro and Poggio Bracciolini, the expression truly emerged in Europe only during the early sixteenth century, when Bonifacius Amerbach, son of the famous Basel printer, called Erasmus the “monarch of the entire Republic of Letters” in 1520. The Respublica litteraria was destined for lasting posterity. “Letters” designated the entire body of knowledge, and “persons of letters” included all those who cultivated it, whether they were referred to as literary men, learned men, scholars, or doctors. In practice, the way in which this utopic space was perceived and interpreted evolved between the Renaissance and the French Revolution. The Republic of Letters was in no way a stable object, but varied depending on the geographical or temporal context. However, within the cartography of knowledge, the role of this territory of erudite persons endured throughout the early modern period. 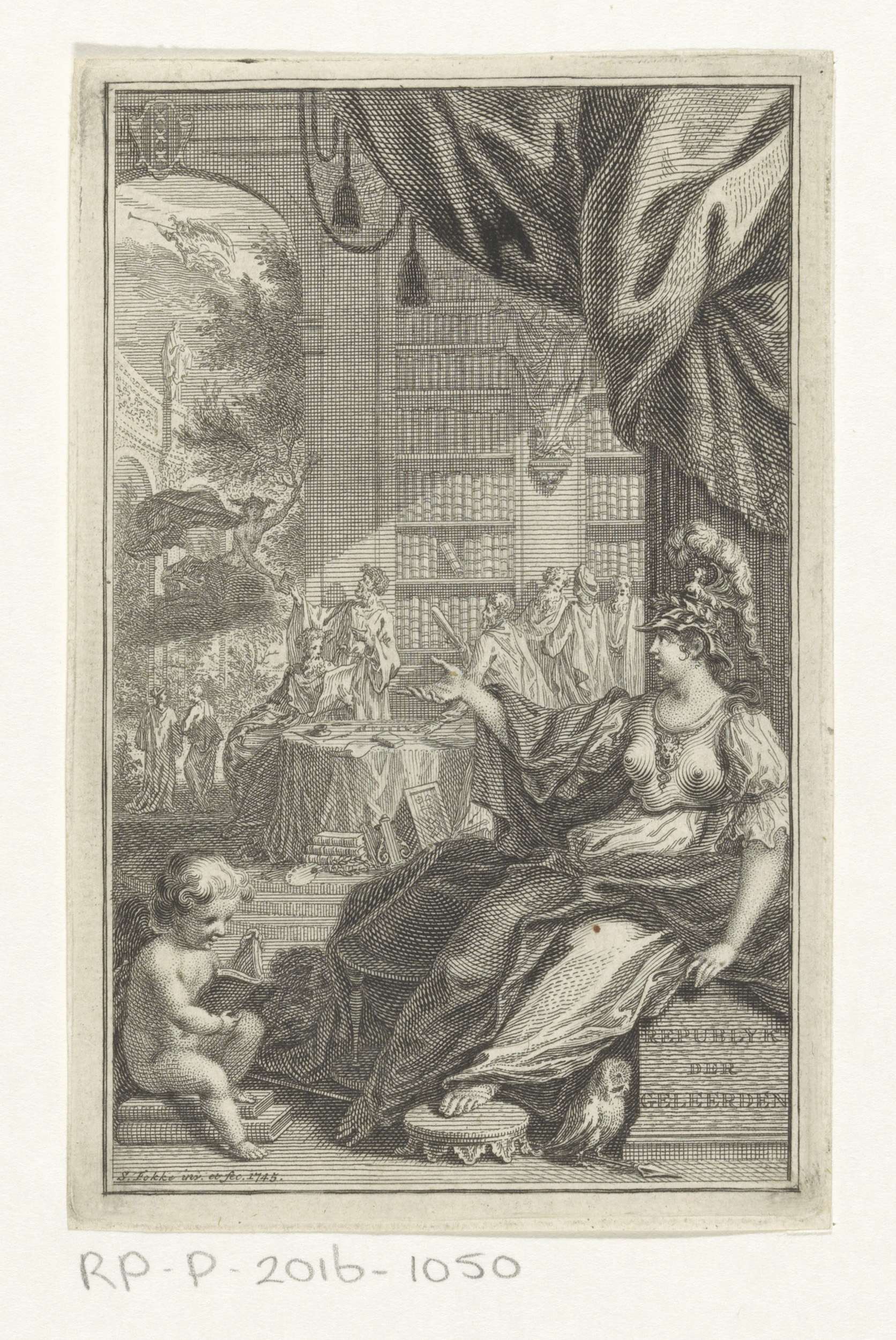 Simon Fokke, Frontispice for the Journal Republyk der geleerden (“The Republic of Letters”), 1745. Rijksmuseum RP-P-201b-1050. Minerva, the goddess of wisdom and knowledge, appears to be watcing over the library where men of letters are working and discussing, as Mercury, the god associated with the press and information, instructs them. Source : Wikimedia Commons 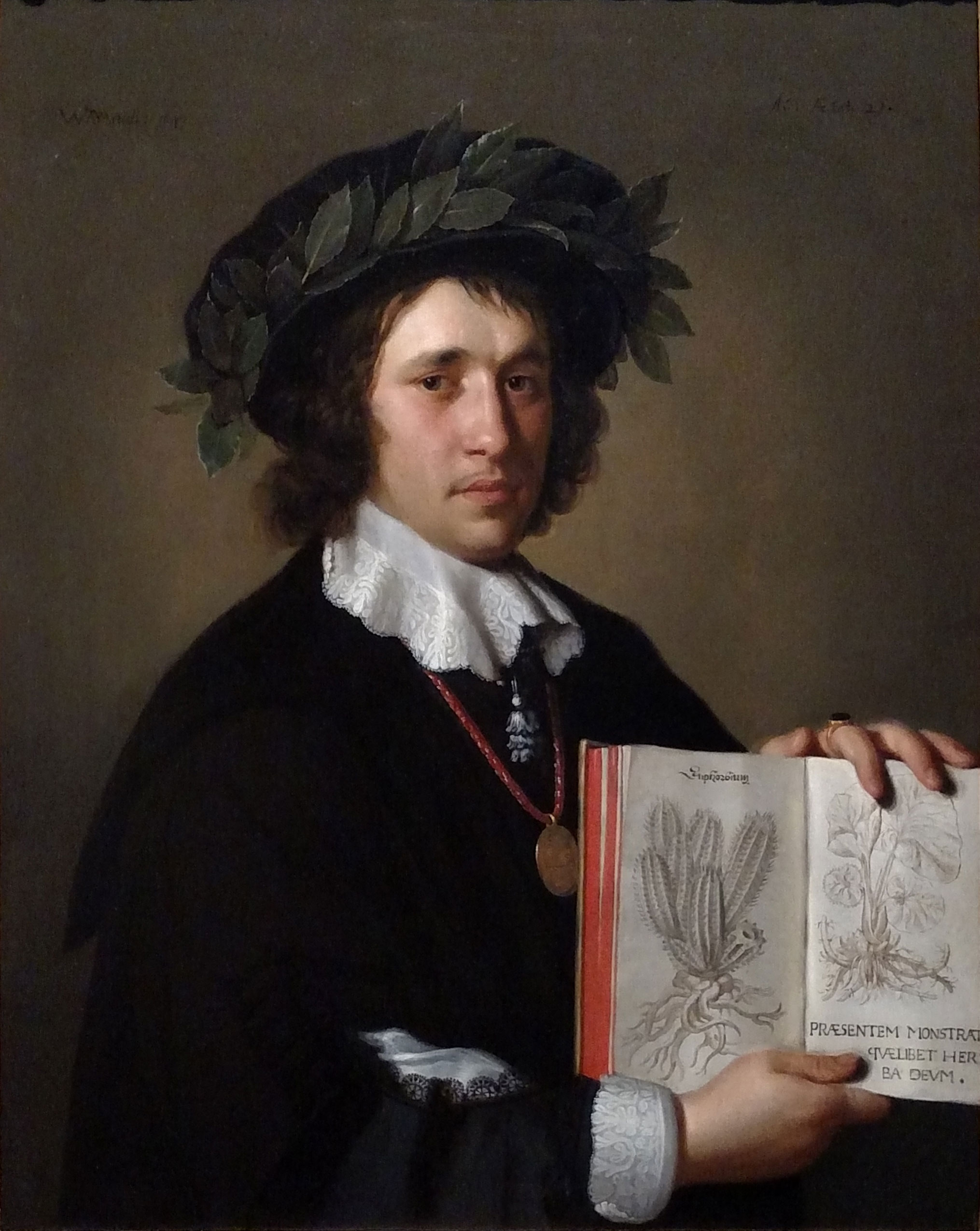 Willem Moreelse, Portrait of an Unknown Laureate Scholar, 1647, Toledo, Museum of Art, 1962.70. The man is wearing the crown of the Laureatus—a mark of recognition of the man of letters—and presents a book on botany showing the Latin verse “this herb points out the presence of God,” an echo of the interconnection between the humanities, sciences, and theology. Source : Wikimedia Commons

“Never before has a Republic been so large, so populated, so free, and so glorious. It extends across the Earth and consists of people of all nations, of every condition, age, and sex [...]. All sorts of living and dead languages are spoken there [...].”

Here, in the words of Vigneul-Marville (1635-1704), is surely one of the most famous definitions of the Republic of Letters. Until the late eighteenth century, it was the space of reference for all European persons of letters, ubiquitous in their minds and writings. A space dilated to the dimensions of Europe and the world, it was marked by a feeling of universal fraternity and collaboration in the construction of knowledge—which could not be limited to the works of just one person, whether they took an interest in physics, botany, philology, grammar, philosophy, or poetry.

The world and the study, the ideal and reality: those are the two spaces in which members of the Republic of Letters moved. They willingly called themselves citizens “of the entire universe” (Peiresc). Against the compartmentalization of states, whose borders grew more rigid with each passing war, the Republic of Letters emphasized its universal and unitary dimension, including across the centuries with authors of the past. It ignored geographical, temporal, and denominational borders—renewing as it were with the earlier medieval Respublica christiana. Tolerance was a key word for its members, who lived as a meritocratic community of equals acting for the common good of humanity.

That did not prevent a kind of competition for primacy, which notably took the form of a “patriotic cosmopolitanism” (L. Daston). France (and Paris) and the United Provinces polarized the Republic during the seventeenth century, while London and Edinburgh asserted themselves during the eighteenth century. Its geographic and social space remained partitioned, especially by religious identities: in the Germanic space Protestant university circuits (Wittenberg, Leipzig, Heidelberg) did not necessarily coincide with Catholic ones (Dole, Ingolstadt, Freiburg).

However utopic it may have been, the Republic of Letters was embodied in places. It was anchored in a territory, with its own centers, itineraries, and sociabilities. Universities and colleges—places for the transmission of knowledge—served as such. More or less formalized scientific academies represented its bulwarks, from the Florentine Accademia del Cimento (1657) to l’Académie des sciences (1666) and the Royal Society (1660). These places were actually highly varied in nature: typographical workshops, the London coffee houses frequented by members of the Royal Society, collections and libraries, such as that of Jacques-Auguste de Thou where the academy of the Dupuy brothers was established, served as so many laboratories for the Republic of Letters.

A common ethic and shared rules of civility brought together the citizens of the Republic of Letters. Devotion to the public good, and hence to the transmission of knowledge without obstacles, were a priority. Obstacles were nevertheless numerous, from censorship (civil or religious) to the material difficulties of postal circulation, along with the disputes that fueled dialogue as much as they sterilized it.

The first form of these exchanges was travel, which took the form of educational circuits, as in the peregrinatio academica and the “Grand Tour.” The European political upheavals of the seventeenth and eighteenth centuries, from the Thirty Years’ War to the Revocation of the Edict of Nantes or the suppression of the Jesuit order, forced numerous men of letters to take to the road, who then acted as so many “diplomats of the Republic of Letters” (L. Daston).

The privileged form of exchange nevertheless remained writing, the letter in particular. It extended scientific sociability amid absence, but also enabled encounters. One of the ways to avoid high shipping costs was to entrust letters and even books to students, who were happy to play the role of transmitter in exchange for recommendations. Correspondence gave form to the Republic of Letters and sustained all of its provinces, both central and peripheral, producing an “epistolary etiquette” (A. Grafton). Its importance expressed itself in the Roman museum of Athanasius Kircher (1602-1680)—the Jesuit who had 760 correspondents—which exhibited his letters amid the marvels of creation. Certain members of the Republic of Letters served as both nodes in this epistolary network and as links between scholars. Nicolas-Claude Fabri de Pereisc (1580-1637) published no works, but asserted himself as a full-fledged member of the Republic through his position as an intermediary and organizer of Orientalist studies.

Correspondence conveyed scholarly information and sustained books and periodicals, the organs for the international circulation of knowledge. The letters of Henry Oldenburg (1619-1677), Secretary of the Royal Society, served for instance as a framework for the creation of Philosophical Transactions in 1665. The journal institutionalized the art of the letter, and established a system of reciprocity: publication was a reward for correspondants, who were encouraged to send new letters to share their experiences, thereby sustaining the journal.

The lingua franca of this space was and remained Latin. It was still the “erudite language” par excellence for Thomas Hobbes or Isaac Newton during the seventeenth century. It was favored for its social aspect as the language for recognition among peers, a sign of cosmopolitan distinction. Despite the affirmation of national languages in scholarly periodicals, some were still created in Latin in order to facilitate their international circulation: this was the case for the Acta eruditorum, founded in Leipzig in 1682, as well as the Acta upsalensis in Sweden. During the eighteenth century, in the commencement address of l’Encyclopédie, d’Alembert regretted the coming loss of this lingua franca, taking note of the frittering of scholarly Europe into a Babel of languages. One of them competed more so than others for the position of Latin: French. It was adopted in 1745 by Frederick the Great’s Academy in Berlin as its working and publishing language for papers, “as the limits of Latin country have visibly narrowed.” (J. H. S. Formey).

The “universal” Republic did not prevent the creation of specific provinces: Republic of Astronomers, of Mathematicians...Beginning in the seventeenth century, it very gradually gave rise to differentiated disciplines. A dichotomy between letters and science emerged in particular. The criteria of legitimacy for the latter slowly became a norm, and in his Essay on the Society of Persons of Letters (1753), d’Alembert criticized the jargon and “convoluted language” of the latter. Beginning in the 1740s, the expression “empire of sciences” began to compete with Republic of Letters. It betokened a kind of disciplinary but also a national fragmentation: the empire called for an emperor, with a ferocious struggle to obtain this position between French and English in particular. Academies played the role of advance fortresses in this political-scientific opposition.

It took until the nineteenth century for the separation to completely take hold. Up that point, actors with varying identities (literary men, scholars, physicians) clearly persisted in gathering beneath a common banner. It was only during the 1830s that the (professional) scientist replaced the (amateur) scholar in the Europe of knowledge, and disciplines took the place of a transdisciplinary Republic of Letters.