The massacre of the Herero and Nama: A colonial laboratory for genocide?

Nicolas PATIN
Home › Encyclopedia › Topics › Europe, Europeans and the World › Europe and Colonial Wars › The massacre of the Herero and Nama: A colonial laboratory for genocide?

The creation of the German Reich’s first colony, in southwestern Africa, unfolded to the detriment of indigenous peoples, especially the Herero and Nama. Beginning in 1904, the Germans responded to their demands with extremely violent military repression, which ended with the willful destruction of these populations. This extermination prompts us to reconsider the role of colonial experiences in the history of twentieth-century genocides. 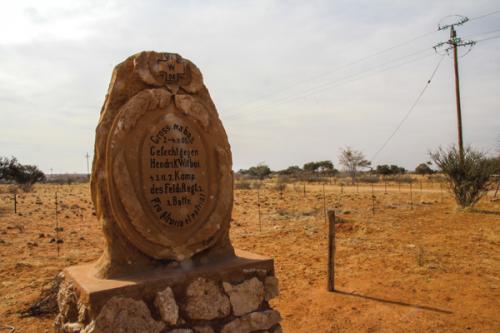 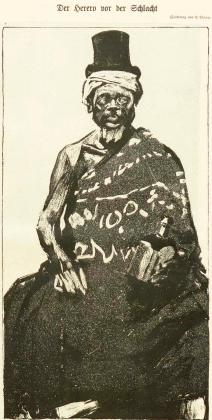 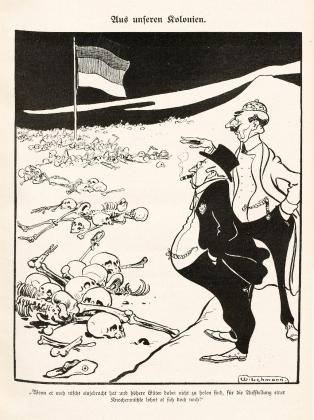 In 1883, the first German attempt to gain a foothold in Africa was launched in Herero territory, north of the Cape Colony. Farmers settled there, and a first contract to purchase land was signed by Adolf Lüderitz, a merchant from Bremen. The area was soon recognized as an official protectorate (Schutzgebiet) of the German Empire.

This land was of course in no way virgin territory. A number of peoples lived there, especially the Herero—whose language belongs to the Bantu language family—and the Nama, who speak a Khoisan language, to the south. Owing to the profound upheaval initiated by the first Christian missions (1806), and faced with the growing influence of the neighboring Cape Colony, the Herero decided to exert their power over their land in 1874. Herero chiefs took a collective stance, explaining that given the giant herds in their possession—their people lived first and foremost from pastoral activity—and the recurring shortage of water in the dry season, they did not have “free lands available that [they] could grant to any other Nation.”

Ten years later, facing the arrival of growing numbers of Germans, Samuel Maharero—considered the Chief of the Herero—reaffirmed his people’s rights, and protested against the sale of plots of land or minerals.

German control over the territory only increased, as the civilian Commissioner Heinrich Göring, father of Hermann Göring, settled in 1885 for five years. In addition, a cattle plague killed over 80% of Herero herds in 1897, a catastrophe that forced many shepherds to work as day laborers on German farms.

The first genocide of the twentieth century

The colony, which now bore the name of German South West Africa (Deutsche Südwestafrika), saw the beginning of open conflict in January 1904 with the armed uprising of the Herero. In the Deutsche Kolonialzeitung (German colonial newspaper) from January 28, an author wrote that he was pleased by the support offered in the English news: this unity “among the European powers engaged in developing Africa” showed that it was possible, in the event of rebellions, to “contain the indigenous” and “enduringly win Africa over for culture.”

“Containing the indigenous”? This project directly led to the total military extermination of the Herero people, and to the first genocide of the twentieth century. In the face of the difficulties experienced by the civilian governor, who was deemed too weak, the German Reich sent General Lothar von Trotha, who was already known for the violence he had exercised in other German colonies. The battle of Waterberg on August 11, 1904 was decisive. The Germans surrounded the Herero. Blocked on the Omaheke steppe, the Herero—including women and children—died of thirst.

On October 2, 1904, von Trotha issued an order, which was later referred to as an “extermination order”: “The Herero people [...] must leave the land. If the populace does not do this I will force them with the Groot Rohr [cannon]. Within the German borders every Herero, with or without a gun, with or without cattle, will be shot. I will no longer accept women and children, I will drive them back to their people or I will let them be shot at”. Von Trotha did not hesitate to poison wells.

The fighting continued, and prompted the Nama to rebel as well, under the leadership of Hendrik Witbooi. They suffered the same fate as the Herero. It is estimated that 80% of the Herero and 50% of the Nama were killed by the Germans.

In the metropole, the colonial war led to a political crisis, as members of the SPD [Social Democratic Party] and the Catholic party refused to fund this colonial war. It was, to be sure, a case of the Reichstag affirming itself within an imperial constitution under which it had little power. However, the arguments of the Reichstag member Matthias Erzberger on November 30, 1906 underscored that the mission of a true Christian people is to protect indigenous peoples. No power will go unpunished if it scorns the natural rights of another people. His party would reject any decision running “counter to the existence of the indigenous.” The Reichstag was dissolved; the new election was named the “Hottentot Election” after the erroneous designation of the Nama as such.

Little did it matter that the SPD won a great victory in the number of votes; in the number of seats, the “Bülow-Block”—named after the Reich Chancellor—strengthened its position, and voted to fund the colonial war. During the election campaign, it referred to the two opposing parties as enemies of colonization and traitors to the country.

The massacre of the Herero and the Nama has recently been considered the first genocide of the twentieth century, before that of the Armenians. It also featured one of the grim modus operandi of the genocide from 1915, namely long marches through the desert leading to the death of an entire population. Women and children were exterminated by German soldiers as part of a coordinated undertaking; the unequivocal order from Von Trotha left no doubt as to the ultimate goal of this colonial policy: the complete disappearance of the Herero.

Our understanding of the massacre of the Herero and Nama is evidently informed by our understanding of the genocide of European Jewish populations: numerous well-documented aspects of the “Final Solution to the Jewish Question” are present in German colonial policy. Words themselves are striking, for after exterminating the large majority of Herero, colonial authorities imprisoned the survivors in “concentration camps.” The term was used in 1905. Unlike other types of camps existing in Cuba and the British Empire, the Germans experimented with forced labor, and even with what the Nazis called “extermination through work.” These camps, especially those of Swakopmund and Shark Island, had an unequalled mortality rate: of the 4,000 men and 10,000 women and children detained there, nearly 7,862 died between 1904 and 1907, or more than 50%.

Germany’s renewed interest in its colonial past—a renewal all the more recent given that the Treaty of Versailles had stripped the country of all its colonies—shed new light on these massacres. Their study revived, belatedly, the notion of a German Sonderweg or “special path,” which would explain how German history had led to Auschwitz. Through the crucial book by Sven Lindqvist, Exterminate All the Brutes! (1992) and, above all, through J. Zimmerer’s work, the question of colonial violence as a model for Nazi violence was raised, a question that was also explored by Enzo Traverso. From the standpoint of the history of ideas, these connections and similarities are striking, whether it be in the perception of a “living space” to conquer, or in a broader racist, racial, and Darwinist vision of social phenomena, of a “biologization of politics” that incidentally affected both Europe and Germany. Similarly, there are numerous parallels to be drawn from the standpoint of practices and technologies of death.

Still, one could say that we are missing a genuine cultural history for the transmission of colonial thought, and especially a social history for the actors of these crimes, one that would refine what, in spite of everything, seems obvious. Do we lack, as Sven Lindqvist has said, “the courage to understand what we know”? 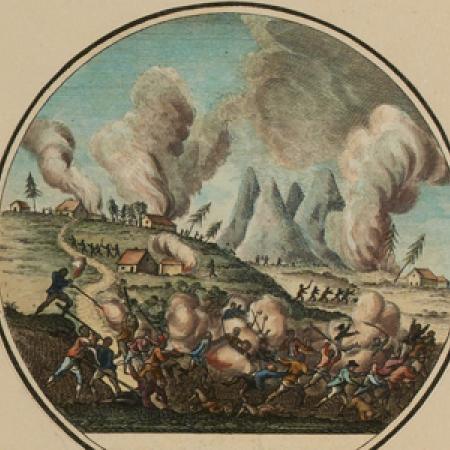 The Saint-Domingue Revolution of August 1791