The Saint-Domingue Revolution of August 1791

During the night of August 22-23, 1791 in Saint-Domingue, the “habitations” (wealthy estates) of the northern plain, in the hinterland of Cap Français, went up in flames. Groups of slaves destroyed windmills and workshops, and massacred white masters and foremen along with their families. Rumor spread at the time of a voodoo worship ceremony—originally from the shores of Dahomey—that took place on August 15, 1791 in a small area of the Morne-Rouge known as Bois-Caïman (Alligator Forest). The ceremony was presided over by a slave from the Clément Boukman Habitation, a voodoo priest (oungan) and future organizer of the uprising. This rumor has assumed a mythical dimension in the historiography on Haiti, although there is no clear record of such ceremony.

The great revolt of August 1791 that ruined the economy of Saint-Domingue was not the first one—a slave uprising had occurred in the island’s south in January 1791—but it was crucial due to its scope and the fact that it transformed into an insurrection. By exerting pressure on colonial authorities, it paved the way for the abolition of slavery in the colony in August 1793. 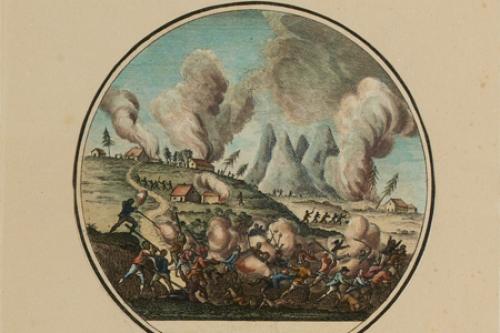 This engraving is one of the rare contemporary representations of the event. It includes the usual scenes from a slave revolt, namely fires and massacres. The foreground shows whites dressed in blue—and generally disarmed (we deduce they are the masters)—and blacks on the offensive dressed in red. One of them is holding a rifle and wearing a Phrygian cap, the headdress of revolting slaves. This detail connects the revolt with the striking episodes of the French Revolution, thereby transposing for a metropolitan public an interpretive key for tropical revolutions.
Summary

Why did the August 1791 revolt spread so quickly? The answer lies mainly in the masters’ lack of cohesion. Since the beginning of the French Revolution, the whites of Saint-Domingue were divided into two factions, each reproaching the other for the great crime of arming slaves. The “patriots” who supported revolutionary ideas were accused by “royalists” of inciting the slaves to revolt through their incendiary speeches, in an effort to destroy the economic power of their opponents. Conversely, numerous accounts underscore the double dealing of the royalists, who wanted to use the revolt to assert that order must be reestablished. However, they quickly lost control, all the while continuing to manipulate the leaders of the insurrection, who, for their part, claimed to respect monarchical authority and the Catholic religion.

Patron-client relations existed between white Creole families and free blacks (affranchis), who exercised great authority over the slaves. On the other hand, the relations between whites and mulatto landowners (born of a white man and a female slave) were more fragile. The latter were divided between hatred of whites, who rejected them, and fear of damage to their property. It was certainly not by chance that the killing of Vincent Ogé—a rich mulatto who had taken up arms to defend the rights of free people of color—at the hands of colonial authorities from Cap Français acted as the catalyst for the unrest that spread a few months later. The uprising of August 1791 broke out in a parish neighboring that of Vincent Ogé.

The organization and internal divisions within French Antillean society provide a much better explanation for the revolt of 1791 than the existence of a secret conspiracy: it was a mass revolt led by “nègres à talents” (“negroes of talent,” i.e. slaves who practiced specialized trades such as coachmen, foremen, craftsmen, herdsmen). Their proximity to the world of whites gave them an understanding of both its deep divisions, and the ideas that agitated this world (human rights, equality, philanthropy). The brutal and coordinated revolt that occurred on the night of August 22-23, 1791 transformed into an insurrection only because insurgent leaders found support and complicity among masters. For example, they had the backing of Catholic priests, free people of color, opponents of colonial authorities, adventurers for whom the chaos was synonymous with profits, and leaders of factions seeking the ruin of their political opponents.

Divisions among the Leaders

While consultation among the revolt’s leaders is an established fact, the form it took remains little known. The figure of Boukman, who issued a call to arms in a speech, remains shrouded in mystery. He was arrested shortly after the revolt, and his head was placed on a spike in Cap Français. The transition from revolt to insurrection was primarily coordinated by Jean-François Papillon (a black Creole coachman who later became a maroon), who acted in accordance with the practices of bands of maroons (fugitive slaves). He sent a letter to the colonial assembly proposing an amnesty for all slaves who had revolted, liberty for fifty of their leaders and 400 of their officers, and the abolition of whipping and solitary confinement as punishments. In exchange, he agreed to use his influence to convince the insurgents under his authority to return to their workshops. His deputies Biassou and Jeannot, who were much less conciliatory, were more inclined to sever all ties between insurgents and colonial authorities, hence the numerous atrocities they committed against prisoners, for which they were soon criticized by Papillon and especially his deputy Toussaint-Louverture, a free black who joined the insurgent ranks in November 1791. Biassou and later Jeannot were executed.

Between November 1791 and November 1792, the defense and administration of these independent territories was organized. On the tactical level, the insurgent slaves formed a large and seasoned army accustomed to military maneuvers and discipline. Many of the insurgents were born in Africa, where most had been reduced to slavery as prisoners of war. They therefore had experience of combat: they were warriors familiar with modern military techniques, as well as the handling of firearms and cavalry, which those who bought them upon their arrival in the Antilles did not suspect.

Negotiations began with colonial authorities through the mediation of a number of Catholic priests—including Father Delahaye, the priest for Dondon parish—whom the insurgents designated as their intermediary. In exchange for a return to the status quo, they demanded that partial liberties be granted (which is to say that some of them be emancipated), as well as a general reform including three days of liberty per week for slaves. The insurgents also tried to exploit the dissension between the colony’s various political factions, in an effort to secure duties in the militia and the maréchaussée (police), as well as jobs in the administration. The influence and power of Toussaint-Louverture grew throughout this phase of consolidation.

From Local Revolt to General Liberty

The consolidated insurgent “réduit” (keep) was protected by camps built under the Ancien Régime, while the former habitations were occupied and fortified. Beginning in November 1792, two counterinsurgency operations were conducted from Cap Français by General Laveaux, which succeeded in reoccupying the primary positions of the “brigands,” the name that colonial authorities used for the revolting slaves. Laveaux organized marches and counter-marches to accustom the soldiers to the climate, and especially to pull them away from urban barracks, where they were exposed to the propaganda of both “pompons rouges” (red pompoms, who supported the island’s independence from the metropole) and “pompons blancs” (white pompoms, who preferred the established institutions). It was also imperative to win over the populations of the reconquered towns, as well as to enlist a significant portion of the insurgents as regular troops. The cornered insurgents took refuge in the Spanish part of the island, especially after Spain declared war against France in February 1793 (from then on, the insurgents were paid by the king of Spain).

A new period began, in which slave revolts broke out in the south (slaves held the hilly area of Les Platons above the city of Cayes for a number of months) and the west of the Saint-Domingue colony (the Port-au-Prince area). These uprisings bear a striking resemblance to the revolt of August 1791, through the importance of rumors, the use of initiation rites borrowed from African cultures, the role of music, and vague objectives and demands.

These revolts put colonial authorities under pressure, and familiarized farmers and former slaves with the handling of weapons, paving the way for the abolition of slavery in the colony in August 1793. 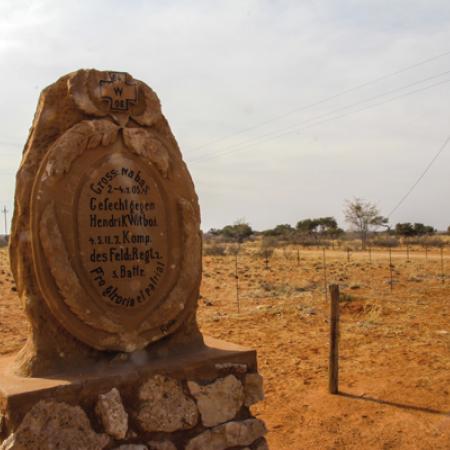 The massacre of the Herero and Nama: A colonial laboratory for genocide?