The telephone in Russia before 1917

The development of the telephone in tsarist Russia is revelatory of the ambitions and weaknesses of the autocratic state. Dependence on foreign technologies forced authorities to cede urban telephony to private actors, all while hoping to impose a monopoly as the public operator for long-distance lines, which were seen as a favorable tool for governing the empire’s vast territory. As a result, the history of telephony in Russia is connected to technological, economic, and political issues. The capacity of authorities to adapt to the competitive market resulted in unstable regulatory measures, which slowed the telephone’s expansion in the country. 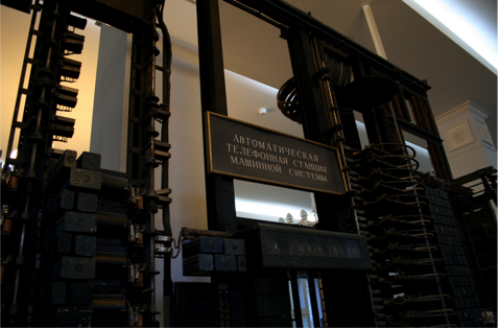 Beginning in in the late 1870s, when the telephone began its triumphal march in the United States, the Russian government seized upon its importance for the country’s economy, which was in the midst of industrialization. It was dependent on foreign companies, for no Russian company had sufficient mastery over the production of telephone equipment. The government was content with legislating in the domain, and in 1900 conceded the construction and management of the urban telephone networks of Saint Petersburg, Moscow, Odessa, and Riga to the most powerful actor of the time, the American company Bell (AT&T). The first manual exchanges made by Siemens and Halske began to operate in these cities in 1882. There was consequently no continuity between the equipment producer and the network operator, as the American concession holder’s monopoly came up against that of the German manufacturer, which had been a pioneer in the production of telecommunications equipment in Russia, and was already well established when telephone networks appeared. Major cities, essentially concentrated in the European part of the country, represented a high-potential market for urban telephony, unlike the country’s East, which was not very urbanized.

Competition between producers and the American operator prompted the Russian government to launch new urban networks in 1885 without calling on Bell, relying instead on the capacities of the Ministry of the Interior’s Mail and Telegraph service central management. This new operator’s first exchange for 60 public subscribers was connected to Kiev in 1886, followed by others to Kharkov, Kazan, Astrakhan, Kursk, and other cities. The concession granted to Bell expired in 1900, and the market for urban networks once again opened. For economic and technological reasons, the Russian government did not plan on a state monopoly in urban telephony, actually preferring competition between public and private actors both foreign and Russian, which led to diverse networks and equipment.

The Moscow network consisting of 2,860 subscribers was attributed for a period of eighteen years to a Swedish-Danish-Russian joint stock company. Starting with a project by Ericsson, the company built a new exchange in Milyutinsky street that served 12,000 subscribers in 1904, who were joined by 13,000 subscribers in 1908, 21,000 in 1912, and 9,200 in 1916. The choice of a network structured around a single exchange made connections costly, which determined the social composition of subscribers, only 20% of whom were individuals, and 65% companies, businesses, and public institutions. In late 1916, there were more than 55,000 subscribers in Moscow. The Saint Petersburg network of 4,375 subscribers shifted to public management. In 1901, the Russian Association of Engineers and Electricians developed a project for its reconstruction, with foreign companies being tasked with the works. The new exchange for 40,000 subscribers began to operate in 1905.

The urban economy in full ferment increased demand for telephony, with 310 Russian cities possessing their own network in 1910. Around 1917, the entire country counted 232,337 subscribers, although the telephone remained a luxury object, as there were only 1.3 telephones per 1,000 inhabitants (as opposed to 131 in the United States and 33 in Germany). In Ivanovo, a city known for its textile industry, the cost of a yearly subscription was 60 rubles, whereas the average monthly salary for a worker was less than 20 rubles. The cost of a short urban call in a public booth was 10 kopecks, while three minutes of conversation with Moscow cost one ruble.

While urban telephony rose thanks to the contribution of foreign capital and technology, this was not necessarily the case for the construction of long-distance lines. The centralized administration of the Russian state and the spread of state monopolies in connection with industrialization prompted the government to lean in favor of a state monopoly for intercity telephone connections, even though it did not plan on using these lines solely for governmental purposes. However, the most active potential users—entrepreneurs—were not interested in the operating conditions for intercity lines proposed by the government. Initially the idea of the state monopoly was abandoned in favor of a contract signed in 1885 with Russian entrepreneurs, who wanted to build lines between Moscow and their factories 150 kilometers away. The first intercity lines were built at their own cost, and for their exclusive use.

In 1890, this network passed into the hands of the Public Treasury, and was opened to all users. In 1898, Moscow was connected to Saint Petersburg at the government’s cost. It was the fourth longest line in the world (over 600 kilometers), with an average of 200 conversation travelling along it each day. Demand for intercity communications prompted authorities to open up the state monopoly. Aware of the telephone’s importance for the country’s industrialization, authorities ceded the construction and management of new lines to private entrepreneurs and zemstvos (self-government assemblies). For instance in 1910-1912, a private telephone company connected Moscow to Nizhny-Novgorod and Ivanovo, and Kharkov to Ekaterinoslav. Russia counted 194 intercity lines in 1916, with a total length of over 15,000 kilometers, 60% of which were run by the government, and the remainder by private companies and zemstvos.

The beginnings of the telephone in Russia thus reveal an instability in regulatory measures, which translated into the government’s hesitation over the economic and political properties of this tool. Foreign companies shared the market among themselves, and provided a decisive technical contribution in constructing networks. The Americans established themselves first as urban telephone operators, with other actors subsequently competing with them. The transition from one operator to another led to the reorganization of urban networks, which increasingly tended toward centralization. While the government aspired to enjoy the benefits of a monopoly over intercity networks, it quickly had to yield to private initiatives, although the latter did not succeed in meeting the technical challenges presented by the very large distances. This capacity to adapt to the competitive market paradoxically acted as a brake on the more rapid and intense development of the telephone in Russia. After 1917, the Bolsheviks inherited from their predecessors not just the rapidly nationalized technical systems, but also the hesitation surrounding the telephone’s economic, political, and social impact. While the intercity telephone was enduringly seen as tool for remote government, the urban telephone—an interpersonal communication tool—struggled to find its place and legitimacy in a society that sought to be collectivist.