The confrontation of two Renaissance giants

The confrontation between Erasmus and Luther was a highly important duel for Europe during the first half of the sixteenth century, for they offered competing visions of humans, history, and faith. While they were both born in a Northern Europe steeped in devotio moderna, and both received the same spiritual and biblical training, their paths soon radically diverged, as Erasmian Christian humanism, which defended an optimistic anthropology, could not agree with the despair of the Reformation. Moreover, Erasmus’s preference for the writings of Origen and Saint Jerome, at the expense of those of Saint Augustine, was unbearable for Luther. The impossible dialogue between these two sixteenth century giants contributed to early modern Europe’s shift into religious schism. 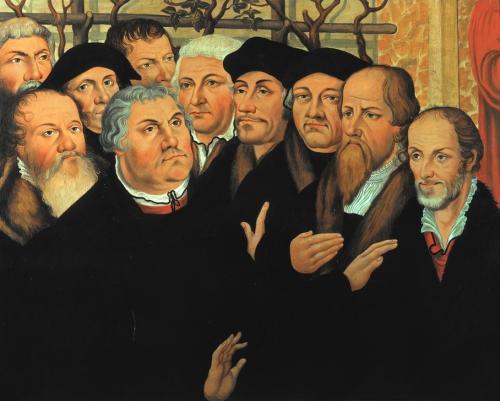 Luther and his Collaborators, by Lucas Cranach the Younger. Detail from the epitaph of Michael Meyenburg, the Burgomaster of Meyenburg, oil painting, copy of the original from 1558, which was once conserved in the Saint Blaise’s church in Nordhausen.
Summary

The story of Erasmus (1467-1536) and Luther (1483-1546) is a tragic narrative, that of two men trained in the same school, who read and wrote to each other, and thought they understood each other, before discovering that they did not have the same fundamental conceptions. Their confrontation during the 1520s summarizes the religious debates which rocked Europe during the first half of the sixteenth century, and which led to the final division of Christianity between Catholics and Protestants. The project of the Church reformer was older, as it had already been two centuries since the “Latin Church was affected by Reformation movements, which led around 1500 to a consensus regarding the need for a Reformation” (Pierre Chaunu). However, the way in which this reformation should be led was the subject of debate. For Erasmus, gentleness was necessary to eliminate the institution’s abuses and vices, as were trust in time and Providence. For Luther it meant breaking with Rome and returning to Scripture. Between these two major figures of the first half of the sixteenth century began the difficult dialogue that was destined to fail, for it began too late, and the divergences involved were far too fundamental. This impossible exchange between Erasmus and Luther, which is to say between humanism and Reformation, plunged the whole of Europe into a schism that deeply influenced the following centuries.

The Netherlands of Erasmus and the Germany of Luther were the most fervent regions of Europe at the time and were central to the sphere of influence of devotio moderna, a spiritual movement turned towards the inner life, examination of the conscience, Bible reading, and prayer. Their first steps as Christians were nurtured by The Imitation of Christ by Thomas à Kempis, the emblematic work of this devotion, which proposed to the faithful that they allow themselves to be inhabited by Christ and set aside medieval mystical speculation. They were both trained by the Brethren of the Common Life who spread this new spirituality, Erasmus in Deventer and Luther in Magdeburg. Their intellectual kinship did not end there. They both became Augustinian monks—Erasmus in Stein, Luther in Erfurt—and were steeped in a highly biblical environment, with each novice of the order receiving a Bible upon their entry into the monastery. However, while they all lived under the same rules and experienced the same everyday life, it was most likely with the Augustinians that the first theological divergences grew, and that the seeds of what would later prevent the two men from understanding each other were planted.

The humanist and the reformer

The path of the two young men diverged when Erasmus lost his parents in quick succession in 1483 and 1484. He said nothing of his grief, but spoke abundantly of its consequences, as he ended up alone, and was entrusted to guardians who forcibly sent him to the monastery. In 1486-1487, he entered the monastery of the Canons Regular in Stein, near Gouda. He was ordained as a priest in 1492, and peacefully left the cloister in 1493. Erasmus discovered humanism in the monastery, whose library had a rich selection of works from Antiquity and by the great philologist Lorenzo Valla. He had found his calling, and it was not a monastic one.

It was only on July 17, 1505, after five years of studying law, that Luther knocked at the monastery door of the Augustinian Hermits of Erfurt. It was through a deliberate and assumed choice that he entered this monastery of strict observance. Luther already knew that he was not a humanist. He admired Plautus and Virgil and was a great reader of Erasmus as well as a connoisseur of the classics, although he never conferred on them the authority he recognized in the Bible. It was most likely on this precise point that Luther separated himself from Erasmian humanism. Behind the lure of beautiful language and the ideal of a trilingual man with a mastery of Latin, Greek, and Hebrew, this movement sought to educate human beings in order to inculcate wisdom and faith, which would be expressed first and foremost through love. Better educated humans were supposed to become better and better Christians. Although Luther loved ancient languages and eloquence, he did not share this optimism.

Over the years, the student transformed into a zealous monk who was appreciated by the vicar general of his order in Germany. Luther joined the convent to calm the anxiety he shared with his contemporaries regarding sudden death and divine judgment and sought peace through his reading. An exemplary and pious monk, he sank into the depths of torment before discovering that the exhaustion of sin is the only way to know the immensity of God’s grace. The essence of the reformer’s theology was expressed in his commentary to the Epistle to the Romans from 1515-1516, when he had not yet broken with the Church. In it Luther identified sin with temptation and affirmed that humans were sinners throughout their lives, and were therefore incapable of deserving eternal happiness. In his opinion nothing could wipe away the effects of original sin. Luther thus swept aside the entire optimistic dimension of humanism and the Renaissance that Erasmus had defended since the early 1510s.

From strife to division

Armed with this revelation, and sustained by Erasmus’s criticisms of Church corruption, he thought he could obtain the humanist’s support in his struggle against Rome after posting his Ninety-five Theses in Wittenberg on October 31, 1517. Without the editions of Erasmus, Luther would not have been able to return to the Hebrew and Greek sources of the Bible or consult the complete works of the Church Fathers. Until the confrontation over free will in 1524, Erasmus seemed to be a reformer and even a precursor of Luther, given how much he had denounced the sale of indulgences, the quibbling of Catholic theologians, and the practices and rites of the faithful.

However, Erasmus wanted a gentle reformation, without violence or clashes. The humanist was dumbfounded by this Reformation which sought to impose itself on the Christian world. Erasmus vainly increased his calls for calm after Luther was excommunicated and outlawed from the Empire (January-May 1521). Distressed by the violence that was ruining the humanist project, he published a discourse on free will (1524) in an effort to preserve the meaning of human effort, which Luther radically denied in his The Bondage of the Will (1525). The fundamental difference between the older Roman theology and the new evangelical theology was clear for all in this text. It was a fight to the death between the human liberty of the Renaissance and the Reformation’s radical corruption of man. This was also a confrontation of two visions of history, that of a gentle reworking of the Church, against a Reformation that destroyed the institution’s traditional foundations.

The more the two men entered into dialogue, the more the gulf widened. Following the tradition of Augustine, Luther attacked the very sources of his rival, Origen and Jerome, while Erasmus maintained a critical intelligence until the end and tried at all costs to maintain the unity of Christianity in order to save the European humanist dream. His contemporaries did not understand him and pitted themselves against him, condemning his spirit of reconciliation and irenicism and soon held him responsible for the situation. As Luther triumphed, Erasmus isolated himself from the unprecedented schism which divided Europe during the 1530s. Upon the death of the humanist in 1536, Luther irrevocably condemned him: “the famous Erasmus has died in Basel without a priest or prayers, ready for Hell.”

Until the end, and despite all of the disagreement, opposition, and breaks that books and correspondence brilliantly attest to, the two men remained connected by their training and approach to Scripture, especially the Epistles of Saint Paul. Their aborted dialogue ruined Christian humanism and gave Luther and the Reformation movement increased legitimacy. The Reformation definitively took hold within the European religious landscape, while Erasmian philosophy continued to nourish the thought of many irenists, before coming to a standstill during the Colloquy of Poissy in 1561 and the beginning of the wars of religion in 1562. Finally, for two centuries this conflict raised the question of the Christian view of humans and society: what was the European spirit? What was the basis for the European dream? It was with respect to these very questions that Erasmus and Luther were definitively unable to agree. 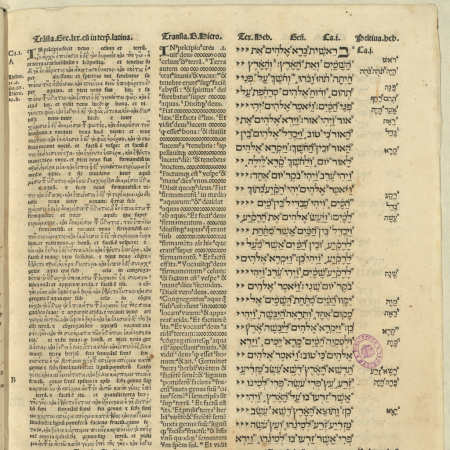 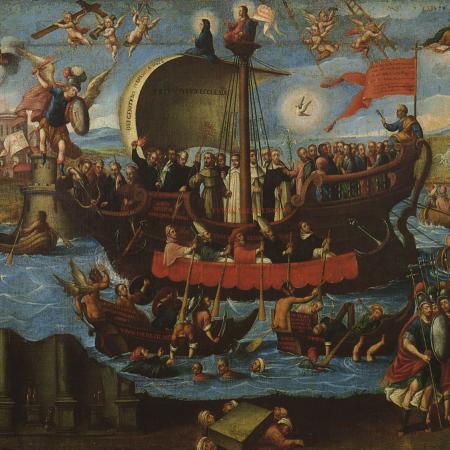 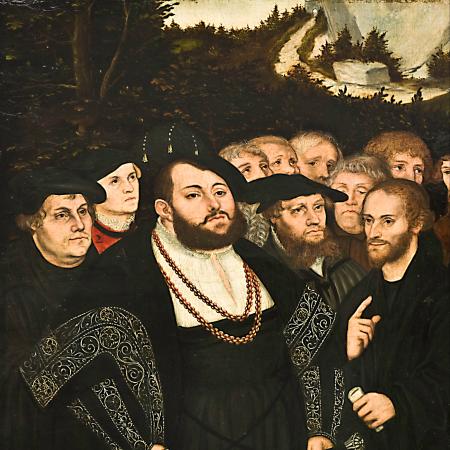 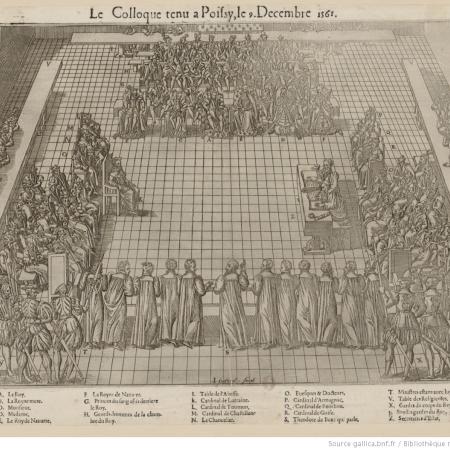